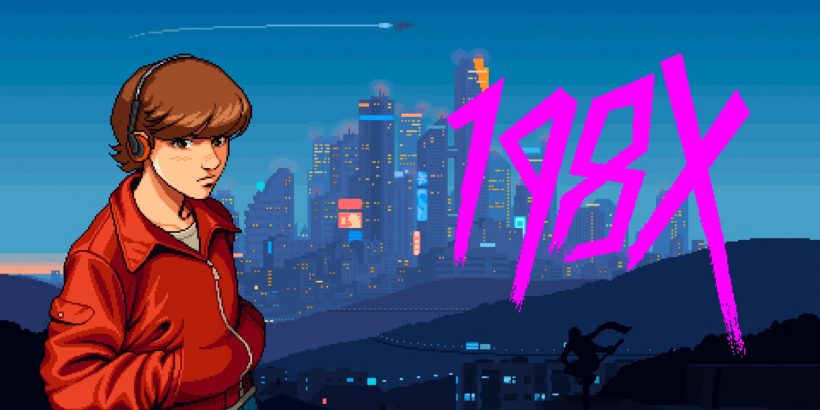 Recently, there has been a surge in games celebrating the history of video gaming.

Indie titles such as Dead Cells, Shovel Knight and Hyper Light Drifter utilise the mechanics and graphics of games from the 80s and 90s to appeal to consumers perhaps tired of the modern gaming landscape. 198X is also a tribute to these games of the past, but takes it a slightly different way, as instead of honouring the games itself, it focuses on how these games influenced us and made us who we are today.

198X centres around a protagonist known only as ‘The Kid’- a teenager longing for something different from their dull and uneventful life in suburbia to give them purpose. ‘The Kid’ eventually stumbles upon an arcade and discovers video games- a way for them to get away from reality.  Whilst this story is not the most inspired, offering very little to the game aside from teen angst and cut-scenes linking each arcade game together, I suspect that we can all relate to its messages. Video games, for me and many others, offered a distraction from life as an awkward teenager. Home or social problems, which 198X hints ‘The Kid’ suffers from, are put aside for a moment as you escape into another world, and that is the beauty of video games.

Gameplay consists of five different classic game genres: Beating Heart– a beat ‘em up, Out of the Void– a 2D shooter, The Runaway- a 3D OutRun-styled driving game, Shadow Play– a ninja auto-scroller, and finally Kill Screen- a turn-based RPG. None of the levels offer much challenge, but this isn’t a bad thing as a good deal of gamers may not have played some of these genres since the 80s and 90s, so it acts as a good reintroduction to classic genres that are making a resurgence.

The problem with this comes when you quickly master the simplistic controls. Each genre only has one level, which is too short to offer any challenge when replayed. Shadow Play was the only style I truly enjoyed playing, as it had the largest variety of enemies and obstacles combined with some original gameplay mechanics that took it further than your generic auto-scroller. 198X can be completed in just under two hours and finishes with a ‘To Be Continued’ message. Whilst a second part may be coming soon, without the extra levels, challenges, or features this may include, this first section feels rushed and incomplete.

Overall, 198X is a decent homage that recognises video games are an important part of our past, rather than simply focusing on how it played on-screen. However, with five different game style that are only utilised once, Hi-Bit Studio tried to do too much, opting for quantity over quality and resulting in an underwhelming gameplay experience that ends far too quickly. New levels need to be added if 198X is to compete with the plethora of other indie titles seeking to replicate the charm of retro gaming.

198X is a nostalgic but incomplete-feeling tribute to Eighties games and their influence. Each of the five genres included is unique and equally stunning, as are the cut-scenes. The problem is that it ends quickly and without exploring each style to the fullest.