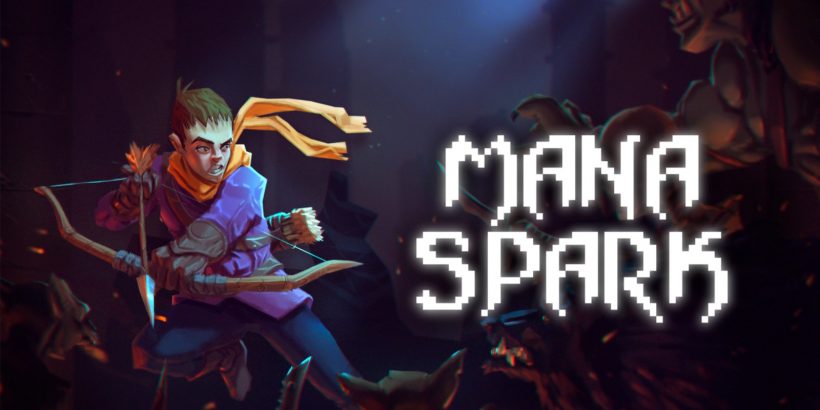 When a game intro begins by telling you that “Being human in this world is a curse”, you may or may not nod your head in agreement.

But, in this case you realise that this actually refers to the world of Mana Spark; a world in which most of humanity is enslaved, and those who aren’t live in fear of being next. The only hope for these poor humans is for a hero to rise up, harness the power of Mana, and defeat the enemy hordes.

When the game begins, that hero is Ellis, the hunter. Armed with a bow and arrows, Ellis fires the weapon with flair, encompassing the sound of the string being pulled taut, the whistle as it glides through the air, and the heavy ‘thunk’ as it hits the intended target. The left stick guides Ellis through the top-down scenery, and the right is used to move a cross-hair to aim your arrows. On the whole the mechanics of firing work very well, although pixel-precision is required. Thankfully arrows are unlimited, which is good news if – like me – you spend the first few minutes of the game shooting the foliage.

Mana Spark takes place in a roguelike world, with maps procedurally-generated and appearing different in layout each time you restart after dying. There are a wealth of beasts between you and victory, and some quick firing with your bow is required throughout. Spiders and Goblats (just when you thought you’d heard every variation of the word goblin) may be relatively easy to dispatch, but some of the other creatures can be swift and brutal in their attacks.

Thanks to the randomly-generated dungeons, you can find yourself stepping into a new area only to be confronted with several enemies from the off, leaving little room for manoeuvre. It can be a little disheartening to have battled through several screens, and not yet having reached a save point, only to be swiftly stabbed before you can say, “Hmm, perhaps I’m not too keen on procedurally generated levels after all when they’re this ruthless”.

It’s a shame, because when I started to feel empowered, my enjoyment of the game increased. I had perfected the art of laying down a sticky web to slow down enemy movements, and had also increased my base health points. But then a swift stab from an aggressive skeleton ended my heroic plans.

So death comes often in Mana Spark. But there are procedures in place to ease the pain. Each time your character dies, you are able to return to base camp, and spend any Mana Runes that you have collected (from downed foes) to enhance your character. The base camp is home to a small band of fellow humans, who will each take your Mana Runes in return for a boost to your chances of survival. The chef will create meals to enhance your stats in the dungeon; the blacksmith will upgrade your equipment, and the researcher will reveal enemy weaknesses (making each successive play a little easier).

Mana Spark features a mellow soundtrack and a gentle colour palette, but the gameplay is anything but relaxed in action. Progress is tense, and even when – further into the game – other unlockable playable characters ease the strain, the game remains a challenge. But if you can accept that repetition and defeat are part of the journey, you may enjoy this pixelated adventure.

If you don’t mind plenty of death and repetition, with some unfair-seeming failures, Mana Spark can offer an engrossing adventure in which, with patience, you can craft your character and battle your way to victory.