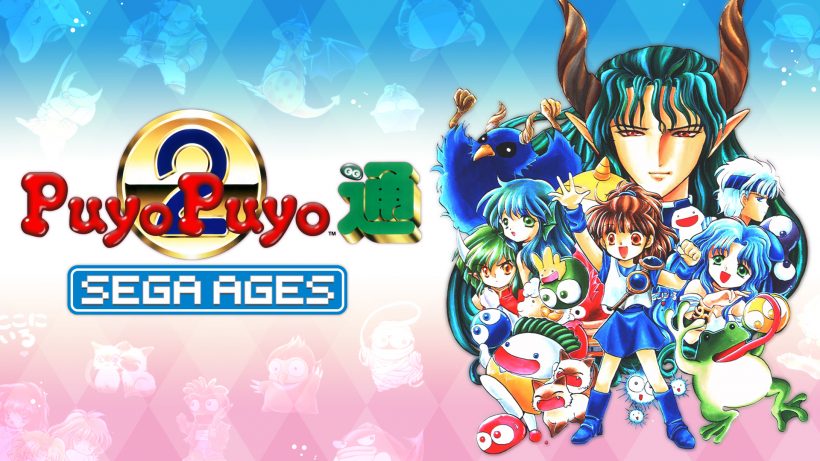 When you’ve put your heart and soul into your favourite, faithful puzzlers, it’s nice to take a break and try something with a fresh vibe: new music, new art, new rules. The recent Switch port of 1994’s SEGA AGES Puyo Puyo 2 can be just that game, despite being a blast from the past.

Puyos are small, cute blobs that fall in pairs. Although the instructions are a little out-of-the-way, with the Manual option in the main menu taking you to an external link, they’re not really necessary. The rules are pretty cut-and-dry: match Puyos of the same colour in groups of four or more, using the D-Pad to move and rotate each pair, and working to keep your board as clear as possible.

As you make combinations, you’ll rack up “Garbage” Puyos (that’s a little harsh, isn’t it?). These clear little guys rack up as you make combos, and are dumped on the enemy to throw them off and bring them closer to filling their board, reaching a Game Over. Meantime, the opponent will be dumping Garbage Puyos on you.

Now, you may notice that the first SEGA AGES Puyo Puyo is also available on the Switch eShop, and it looks eerily similar. The main difference between the original game and its successor is the way that Garbage Puyos are handled. The old game was cut and dry, with each player throwing set amounts at each other. It made for a more unforgiving experience. In its sequel, if some Puyos are ominously looming over your board, you can offset the amount before they fall by completing your own combos. (Think lowering the amount of grey blocks that appear from your enemies in Tetris 99.) This upgraded system gives you more of a fighting chance in a pinch.

Your adversary depends on the game mode. In Arcade Mode, you’ll climb to the top of a tower by racking up points in face-off after face-off. Each opponent is chosen via roulette, with a final boss waiting at the top. In Endurance Mode, you’ll go for a good old-fashion win streak against the same cast of characters. The 90s anime style portraits are cute, and we can learn more details about them in a separate menu – which is great, since all of the introductions in the aforementioned modes weren’t translated from Japanese. There is local and online two-player available, as well. It’s unfortunate that there is no solo mode for those who want to kick back and enjoy a more meditative, non-competitive experience.

Being a port of an older game, the nostalgic visual style and fun retro music in SEGA AGES Puyo Puyo 2 are obvious draws, but the small aspect ratio is a more unfortunate part of the territory. Despite that, there is a reason that the Puyo Puyo franchise is still enjoyable decades later: it’s a simple and timeless puzzle design that anyone can jive to. While it’s true that indie developers are pumping out more robust puzzle games for smaller price tags, the charm of a classic title is priceless.

SEGA AGES Puyo Puyo 2 features all of the charming nostalgia that comes with a retro game – and some of the drawbacks. Although not very robust, the different versus modes offer multiple ways to enjoy the same timeless experience.