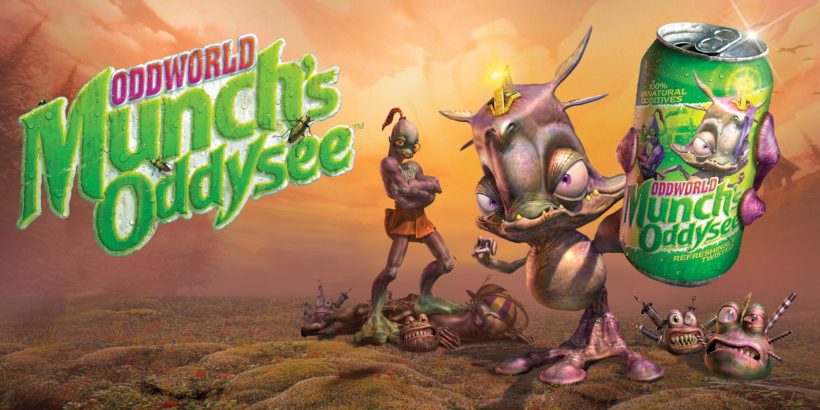 Many years ago, in the distant past of the 90s, gaming took a generational leap that saw most franchises move from 2D to 3D. Sidescrollers and platformers suddenly had depth to contend with, and for every Super Mario 64, there were a few titles that stumbled in their attempts. Coming off the back of the two incredible previous Oddworld games, both seeped in black comedy, physical humour and a dour anticapitalist mood, I had truly hoped for Munch’s Oddysee to continue the winning streak.

Unlike the previous two games in the series, Munch’s Oddysee not only takes baby steps into the 3D platforming genre, but it also has you control two protagonists with the introduction of Munch, an aquatic dolphin/frog abomination who has escaped the greedy nets of the Glukkons, who want to turn his species into food. Abe is told by the ‘The Almighty Rasin’ to help Munch, and so it’s up to you to work through various factories and facilities as both Abe and Munch to save their respective species from certain doom. If this all sounds mad, it definitely is, but I still enjoy the series’ signature crazy humour, and the environmental angle added in this entry is well executed with a fair balance of comedy and morbidity.

Next, however, we must talk about the platforming. It’s like a product of its time, but the traversal through Munch’s Oddysee, whether jumping through levels, manoeuvring explosive obstacles or shepherding NPCs all feels simply dreadful. Every second of gameplay is met with clunky controls and fiddly movement. While the physical humour can perhaps explain the strange jump animations, it’s unforgivable how difficult it is to assess and successfully traverse levels with either protagonist. Objectives often switch to gathering NPCs and utilising them and your powers to attack enemies and open doors, which also becomes difficult when you’re wrangling several characters instead of one. The voice commands are often too slow to react to enemies and even miss out certain helpers occasionally at critical times. Things should have been tightened up for this release, as this gameplay is simply not fun today.

Cans of energy drinks can be found dotted around levels, along with rideable vehicles and possessable enemies, all of which give Abe or Munch temporary powers, which are often hampered by the constant battle with archaic controls and an unruly camera. Change is clearly evident in the visuals, however, as the game runs at a smooth frame rate in handheld or docked, and the original textures presented in higher resolution, even if the ambience seems to be lost in the process. Menus strangely look untouched, looking an unfortunate muddy green. Changes stop there, as other than simple brightness settings, you can’t change controls, visual style or even for subtitles, which I found particularly annoying when I couldn’t understand the badly mixed vocals of characters I clearly was meant to be paying attention to.

How much you enjoy Munch’s Oddysee is likely directly related to any nostalgia you hold for either the original Xbox release or the series, but this is a franchise low point regardless. Repetitive, arduous gameplay and a lack of significant additions or changes mean this is nothing more than a good-looking version of a bad game. The trademark dark humour is still intact, but you’ll have to work through some terrible 3D platforming and truly monotonous missions to glean what fun you can.

A timestamp of a transitional period for 3D platformers, Oddworld: Munch’s Oddysee may muster up nostalgia for original players, but the clunky, tedious platforming and missions reveal what a true fossil of the genre this entry has become.