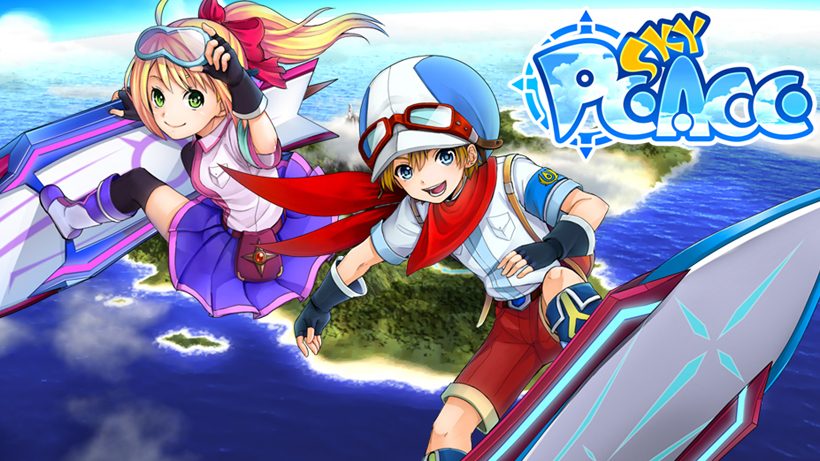 There is something appealing about the idea of jumping onto a hoverboard and flying through the skies at high-speed. Though it might not be possible for me to do such a thing in real-life, SKYPEACE has me covered by allowing me to live out this fantasy on the Nintendo Switch.

SKYPEACE offers players high-speed action that is similar to that of an endless runner title, where avoiding enemies is the key to success. Picking up coins, gems and other items will help to build up your score and offer a higher rank in the end, but quick reactions are needed to climb to the top. There are even some items that allow you to gain extra speed and a state of invincibility. 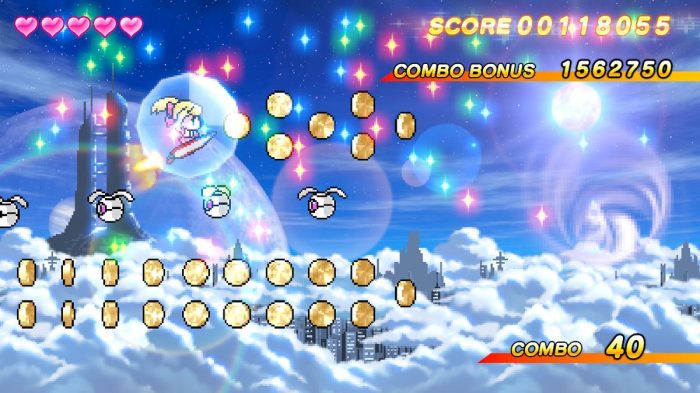 Taking control of one of two characters, players will be on the left hand side of the screen and need to move around a grid of nine spaces to avoid enemies and pick up coins and items. Unlike a normal side-scrolling shooter or runner, the player character always returns to the center of the grid whenever you let go of a movement button. This means to go to the top of the screen you hold the up button, and so on. As the control scheme for the title is only the movement of the character, the analog stick, directional buttons, and face buttons can all be used for moving around the screen which makes the controls simple and accessible.

Of course, each stage will see you also needing to manage your health as taking to many hits from enemy attacks will ultimately resulting in a game over. Should you reach such a point though, you can simply restart the level, with no long term punishment keeping you away from the action. SKYPEACE keeps the sense of high-speed gameplay throughout the whole title, even into the loading times and menu transitions. 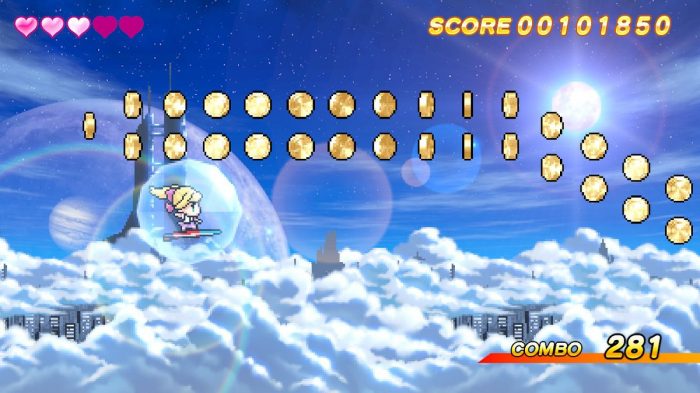 As you progress through the levels the challenge becomes greater with small changes in enemies, spawns, and movement patterns keeping the experience fresh and interesting until you reach the end of all the stages. Once you have done this, there are a number of achievements to be completed and of course, replaying levels to get the highest rank will ensure plenty of replayability. That along with the solid and responsive gameplay of SKYPEACE makes it an enjoyable gameplay loop.

Performance of SKYPEACE is solid with no slow down at all during this high-speed title. On a large screen it might be wise to sit back a bit as the motion can become blurred together, but on the Switch’s display it is a smooth ride with crystal clear clarity. The pixel artstyle fits the gameplay and is a cute aesthetic choice that is matched with a fitting soundtrack and audio design.

SKYPEACE is a small title that offers a solid experience. It might seem odd to some players at first, the lack of a shooting system or some kind of advanced controls, but the simple gameplay is refreshing and somewhat relaxing. It is a little title with a low commitment needed to finish it but for those who stick around you will find a pleasant title.

SKYPEACE might be a small title but it is packed with character and charm. Your find a relaxing title that offers enough challenge to keep you entertained for a few hours and that is worth the price of admission.