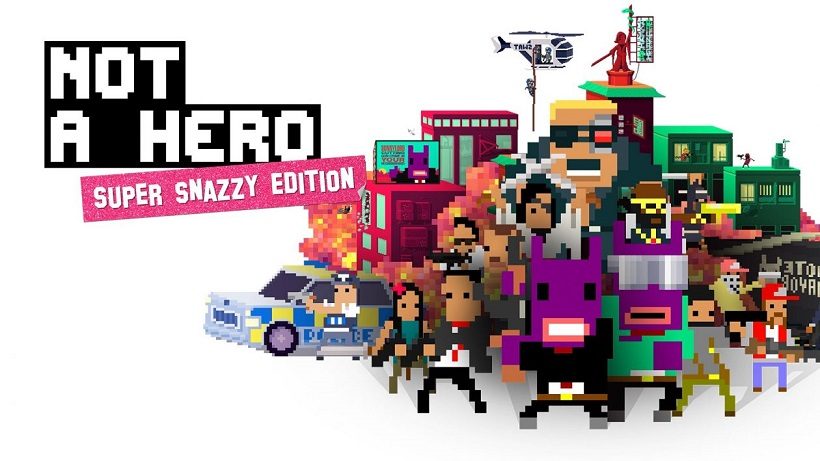 Who said politics was boring?

The year is 2015; the next General Election for the United Kingdom is coming up, and in the run-up, a video game comes out satirising the whole process. Now in 2018 as Not A Hero arrives on Switch it is more relevant than before.

The electorate is fickle; how best do you win them over, especially if the world will face an apocalypse if Bunnylord (an anthropomorphic purple rabbit) doesn’t win the election in three weeks’ time? Tackling crime straight on by shooting it in the face isn’t a bad approach to take, and that’s exactly what Bunnylord sets out to do. He gets help from Bunnylord’s Fun Club, which comprises a growing number of eclectic individuals from across Britain committed to utilising their unique skills to bring down the three crime lords plaguing the UK.

Not A Hero is set across three weeks, with every level representing a different day of the election campaign. Each week takes place in a different urban area controlled by a specific group. The game starts off straightforward as you take on Russian Mob. Up next is a quite unremarkable drug gang, made memorable by the interesting missions you need to complete to dispose of them. Finally, is the “Pan-Asian Triad Yakuza Gang”, which is visually the most interesting section of the game, but also the most challenging, and often frustrating (Samurai and Ninjas can one-hit kill).

Each level has a main objective that needs to be completed before being able to make your getaway via the Bunnyvan. These core objectives vary from putting up campaign posters to destroying all the fish tanks. There are also three side missions in each level which introduce more challenge. Many require a certain amount of a randomly generated item to be collected, getting a kill streak, reaching a certain point in time, among others. The payoff for completing these tasks is ultimately to achieve a higher completion rate, but in doing so the tasks also increase Bunnylord’s approval rating on his election campaign. At certain points, new characters can be unlocked to play as from the Fun Club.

At its core, each level of Not A Hero is about shooting bad guys, and therefore it’s the range of playable characters which brings variation to the gameplay. Each character has a different type of gun with different firing/reload rates and ammo capacity. The guns also deal different amounts of damage per bullet. Unsurprisingly shotgun-wielder Cletus deals out a lot of damage but has to reload more often, whereas Clive (the “British John Wick”) has a very fast and accurate rate of fire but deals far less damage per bullet.

There are many satisfying moments to be had through playing Not A Hero. While many will come from getting into the gameplay itself,  the briefing and debriefing interludes which occur before and after each level bring the full thrust of the game’s excellent not safe for work dark humour. The comedic tone and satisfying and varied gun play combined make for a satisfying experience that goes beyond its 2D pixel aesthetic.

Not A Hero is a dark and brutal delight, capturing the misanthropy of the time better than it could have originally anticipated. You’ll need to keep your wits about you as you bring Bunnylord his win, by any means necessary.