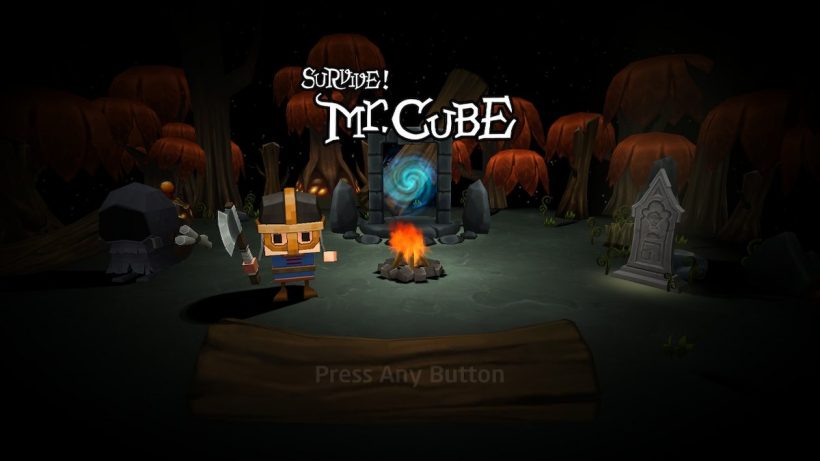 Survive! Mr Cube tells the story of a man in an ‘unknown dimension’ who needs to escape in order to get his life back. At least, that’s the gist of it, as the grammatical errors in the game’s eShop listing are something to marvel at.

The features of your typical roguelike are here. Presented from a top-down viewpoint, you must guide your cubic protagonist through some very dark environments, each of which are randomly generated, slicing at enemies and discovering portals which move you to a new part of the map. But as is the problem with a load of games from the genre, there is never a satisfying payoff to your exploration. There’s a boss located somewhere on the map, and you must make it from section to section before eventually locating it. But the journey on the way is far too samey, and the only ones who are likely to commit enough time to be able to see the boss are the completionists.

You only get a small section of the map visible to start off with, but moving will fill in the map as you go, pushing the fog which blocks your viewpoint permanently away to remind you where you’ve already been. All areas look very similar, and the experience is the same from one area to the next. It never really comes across what Survive! Mr Cube is trying to do differently from all the other games of its kind.

The graphics don’t help. It’s not as if they’re unclear, but the amount of enemies moulded into the cube shapes makes everything feel alike. Yes, there are bigger enemies which require a higher amount of slashing in order to dispose of, but the overall experience of battling them all is pretty much the same. Music is better, though – a light orchestral sounding background tone does have the feel of adventure about it, and even brought me to think of my favourite music delivery in Zelda: Wind Waker.

And there’s permadeath at play, which can put a halt to a playing session with a sharp sense of immediacy. There’s a good chance you might see your characters again after they’ve been lost as a more powerful enemy – tackling them early on in your playthrough isn’t advisable due to a steep difficulty curve. The weapons you start with are quite irritating – stabbing a sword by using the right stick is by no means intuitive, and enemies will quickly round you and attack from behind before you’ve stopped waving your weapons around at the air like a loony man. Swinging an axe around in a full 360 makes things a little easier, but fortunately later on you’re provided which much more effective weapons.

On top of battling the weapons, you’ve also got to manage health and stamina. Stamina is used up each time you use your weapon, and replenishments come in the form of potions which can be collected from chests dotted around the map. Some chests will even attack you, which is not the most forgiving when you’re low on health.

It’s not easy to give a solid recommendation for Survive! Mr Cube over other roguelikes. The game was popular on other system for its easy achievements; the Switch version goes without. At least this one won’t crush your wallet.

Survive! Mr Cube is too repetitive for a recommendation, and the time that you put in doesn’t pay off with a satisfying conclusion.