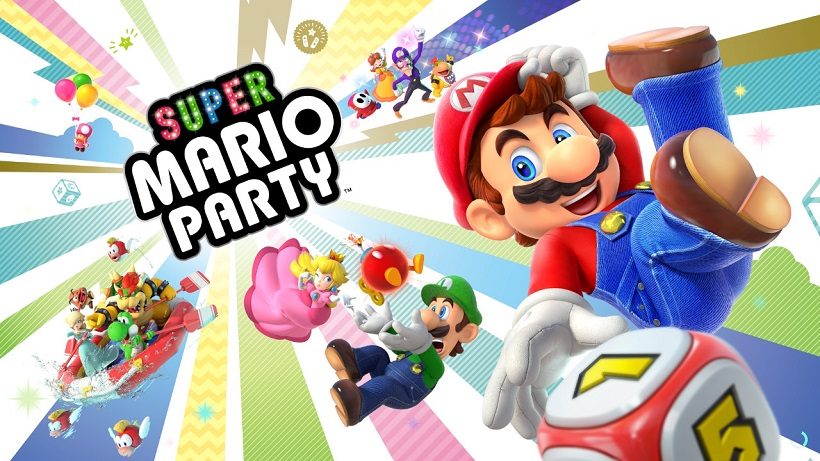 The latest instalment in the ever-popular Mario Party franchise is here, and the series has never looked better. Alongside its traditional board game mode, Super Mario Party boasts a huge variety of minigames (over 80 in total), an impressive cast of characters to play as, a plethora of gameplay options and – a first for the series – the ability to play online with friends in a small selection of multiplayer minigames. But is it worth picking up?

If you’ve never played a Mario Party game before – which, if you haven’t, is a travesty by the way – the concept is fairly easy to grasp. Travelling around the board, you must collect coins, outwit your foes and use booster items to your advantage in order to defeat your rivals. Most importantly, your goal is to track down the elusive Toadette and her Super Stars, and collect as many as you can; the person with the most Super Stars at the end of the game wins, so there’s no sense in being stingy with your coins.

Given its nature as a party game, Super Mario Party is best played with friends. Should you have none, or have lost them to a crushing defeat in a previous Mario Party, computer-controlled characters are always available to fill the void. With three difficulty levels available – Recommended, Hard, and Very Hard – you can choose the level which best suits you and your playstyle. Additionally, you can shuffle the available characters that you play alongside, though the inability to hand-pick the characters you wish to play with certainly makes the experience less enjoyable.

This aside, Super Mario Party‘s Mario Party mode is teeming with potential. Each playable board has its own quirks and special features, making each run just as engaging and exciting as the last. You can never predict how your next game will turn out due to the ever-changing after-game bonuses, in-game events and unpredictable CPU characters. One aspect of the gameplay that can feel rather unrewarding, though, is how easily you come by coins. It never feels like you’re in a position where you can’t afford a Super Star; rather, your main concern is the luck of the die, constantly being forced to question whether your character’s unique dice is worth the risk. Still, this ease of obtaining Super Stars makes the competition even more fierce, as it really is anyone’s game.

One of my favourite new modes in Super Mario Party is its River Survival mode, which forces you to work together with your fellow players rather than against them for a change. Fighting to reach the end of the river before time runs out, you must tackle countless minigames, row fiercely using the Joy-Con’s motion controls and carefully co-ordinate your route in order to succeed. The more minigames you play, the more chances you have to add precious bonus seconds to your clock, so it’s always worth taking the trickier routes in order to reap the best rewards.

There are issues with this mode, however. For a start, when playing alongside the CPU, you feel like tearing your hair out while the AI characters flap their oars aimlessly in the water. They don’t follow your direction, constantly working against you, and you can often miss valuable bonuses or minigame balloons when trying to judge the optimal second to row your way out of trouble. Equally, the difficulty you select before playing can often make the competition seem unbalanced, with the easier options feeling too easy, and the harder ones feeling impossible.

Super Mario Party‘s Sound Stage mode is also a fun one, but is undermined by perhaps the most frustrating aspect of the game: its control scheme. Whoever thought that mandatory use of the Joy-Cons (as in, only Joy-Cons are compatible currently) throughout the entire game was a good idea was clearly delusional, and the constant use of motion controls can mean for tiresome gameplay – both physically and mentally – after a while. The motion controls simply aren’t intuitive in many minigames, and this can lead to frustration – as can the thumbs-up motions and friendship gestures within parties, as while they’re cute, even they become bothersome eventually. At least the game’s menu is intuitive, with the Party Pad offering a traditional-style navigation system if wandering around the open-plan party plaza isn’t your thing.

Perhaps the most eagerly-awaited aspect of Super Mario Party, though, is its offering of online multiplayer in the form of the Online Mariothon mode. Sadly, it is a disappointment; the mode is heavily limited in terms of its gameplay and minigame selection, with very few games being on offer and its connectivity between players being poor. While I have had some very enjoyable games, others have been barely playable, and the frustrating motion controls only made my experience worse.

The graphical quality of Super Mario Party is certainly to be admired, with the artists’ attention to detail going further than ever before. Improved textures and lighting effects make the board environments actually look semi-realistic, and coupled with the game’s excellent upbeat soundtrack, the overall mood of Super Mario Party is exceptionally positive. The in-game rewards system furthers this mood, allowing you to purchase various useful tips and items with the credits you earn through playing, and it is great to see a variety of potential goals and challenges implemented in a game that is normally so minimalistic in its offerings.

Gripes with the AI, online minigames and Joy-Con control methods aside, Super Mario Party is certainly a game worth picking up based on its local multiplayer alone. Although Nintendo still haven’t taken the hint to add quality online multiplayer options, the online minigames are at least a step in the right direction, and point to a positive future for the franchise that will extend beyond the comfort of the home. The only thing I have to wonder for this installment is whether we will see additional maps and characters added to the game in future updates, as this could truly enhance the experience being offered.

Super Mario Party is the Mario Party title we’ve all been waiting for, offering a fun and exciting experience for all the family. Although you may lose a few friends playing it, and the control scheme and online offerings leave much to be desired, there is plenty of content on offer and endless hours of fun to be had. Be sure to give all of the new modes a try, and explore all that the interactive plaza has to offer. Just don’t spend all your coins at once, or you could be all out of luck..!