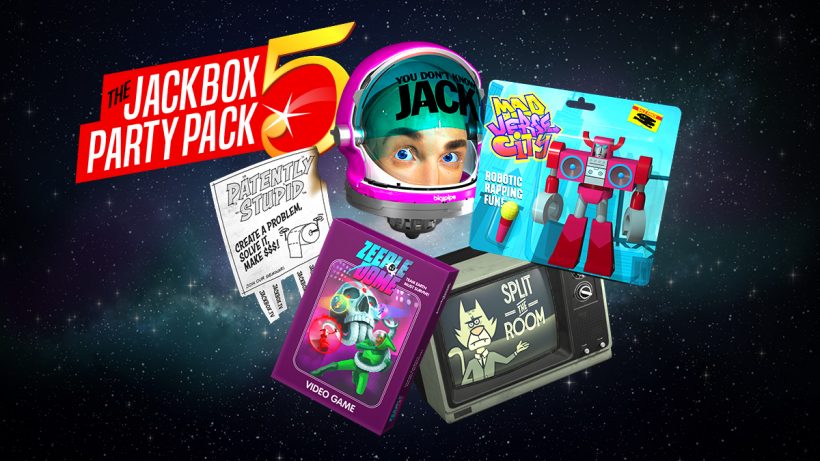 How time flies! Originally released in 2014, the Jackbox Party Pack series is now on its fifth iteration with no sign of slowing down. Thanks to its annual releases, I wouldn’t blame you for turning your nose up at the series, cynically brushing it off as a lazy cash grab. That would, however, be wrong. The Jackbox Party Pack 5 is another admirable release that, for me at least, has brought plenty of enjoyment to parties (accompanied by copious amounts of alcohol and pizza, of course!) thanks to its genuinely engaging and hilarious mini-games.

For those who may not be familiar with how The Jackbox Party Pack 5 works, you can play with a minimum of two players and a maximum of eight. But don’t worry, you don’t need to juggle an obscene amount of Joy-Con controllers to accommodate eight people – one person sets up the game with the Switch’s controller, and the participating players will then be prompted to head to the Jackbox website via a mobile device and enter into the game’s ‘room’ with a pass code. The players’ mobile device then essentially becomes their controller, and it works surprisingly well across all the mini-games.

Returning to the series, and perhaps Jackbox 5’s highlight, is You Don’t Know Jack, the bonkers quiz show spanning three rounds. This time, it’s stylised as a spin on modern day streaming services, such as Netflix. Much like previous iterations, you’ll be asked a series of questions, all of which are deliberately worded in a way that will undoubtedly confuse you and you friends. For example, one of the questions may present you with four potential answers that all sound the same, but you’ll need to select the correct spelling to get the question right. The final round is the fan favourite Jack Attack, in which a series of clues is presented on screen and you’re prompted to choose the correct words that correspond to the clue within a strict time limit. It’s incredibly tense, because if you tap the wrong answer, you’ll automatically lose a substantial amount of money.

The other standout mini-game is known as Madverse City. Here, you’ll be coming up with ridiculous verses to rap battles. You’ll be given the option to choose a single word based on a particular category, and that word will be added to the game’s first line of the verse. Then, you’re free to come up with the entire second line of the verse. This is where the Jackbox Party Pack games have always shined – allowing players to run wild with creativity can lead to some truly hilarious moments (and I should point out that the game doesn’t penalise you for crude words – so go wild!).

The other games aren’t quite as good, but still well worth a shot. Zeeple Dome is more of a ‘traditional game’. The players will pick their characters and you’ll need to defeat the enemies on screen by flinging your characters directly at them. To do this, you’re presented with a catapult on your mobile device – simply pull back, release, and your character will fly in the opposite direction.

Split the Room has you completing certain statements that may split opinions – this had the potential to be as funny as Madverse City, but sadly the more outrageous answers just straight up didn’t make much sense with this game. Finally, Patently Stupid is a drawing game, and has you coming up with creative solutions to problems presented on screen. It’s more difficult than it sounds, and as such my friends and I found ourselves being drawn back to both You Don’t Know Jack and Madverse City.

As with the previous releases, The Jackbox Party Pack 5 contains a few strong mini-games, and a few weak ones. But with the game almost actively encouraging crude creativity, there’s so much pure joy to be found here. Gather your friends, break out the booze, and let the good times roll!