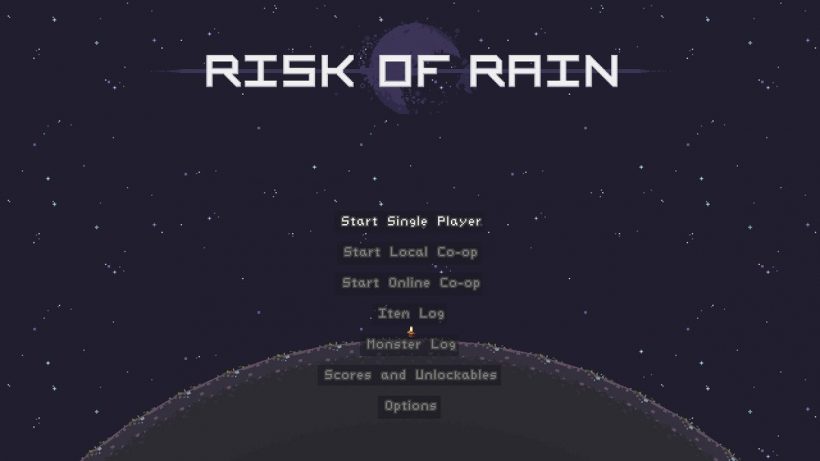 There was a moment in which the word ‘roguelike’ didn’t put people away from certain games. Dying and restarting a new run from zero felt like a fresh new approach – a perfect match to the more arcade-ish experiences. It was during that time that Risk of Rain was first released. Now that it is available on Switch, it proves one thing about an oversaturated genre: roguelikes can still be enjoyed, as long as the game excels in what it does. That’s what Risk of Rain does. 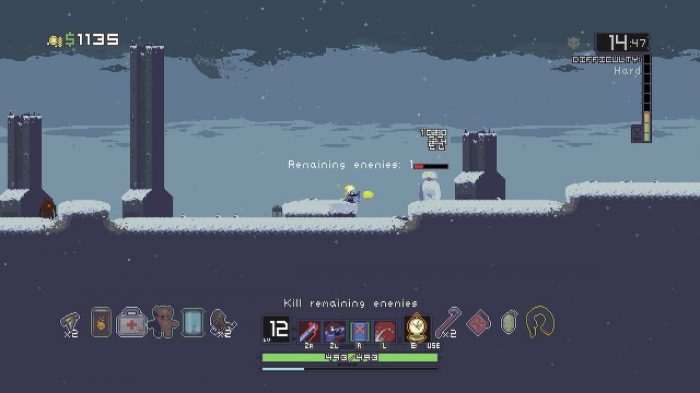 Explore alien worlds in the search for the next teleporter.

In a short introduction, Risk of Rain tells everything you need to know about its narrative. You’re one of the crew members – or inmates – of a transportation ship that has been invaded and destroyed by an alien entity. Now, stranded on an inhospitable planet, you must find teleportation devices on different levels, until you’re finally able to reach your ship. All in the hopes of reclaiming it back.

This whole adventure takes place as an action platformer game, in which the focus lies on gathering items to increase your odds of surviving against dozens of enemies. Enemies killed will not only give you experience points, but also gold that you can use to open crates or pods. Each item gathered will make you more powerful in interesting – and sometimes creative – ways. From homing missiles to an electrified ukulele, each ‘build’ is fun and unique. 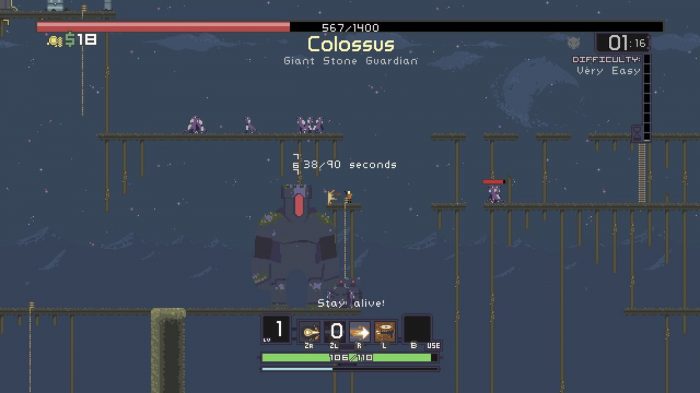 In order to balance each one of your runs, Risk of Rain features a time-based difficulty meter. So, while exploring the full level may allow you to gather more items, you’ll have to face more powerful enemies the longer you wait. This turns Risk of Rain into one of those very challenging experiences, in which you’re constantly measuring your risks and rewards. On top of having different difficulty settings that you can choose, each run will also become easier or harder depending on which character you use.

Here lies other outstanding aspect of Risk of Rain. At the beginning, you’ll only have the Commando character available – which follows a simpler shoot n’ run gameplay style. However, as you progress and perform different tasks during your runs, you’ll unlock other different characters. Each one of them have a unique set of skills and demands different approaches to the combat. With twelve characters in total, Risk of Rain adds a lot of replayability, especially when you consider how differently they play. At times, the hardest part is understanding what is happening on screen.

Due to its minimalistic pixel art style, Risk of Rain‘s presentation can be seen as an acquired taste. Near the gigantic bosses, the tiny characters have their own charm, but the action can become complete chaos at times, where it becomes almost impossible to follow everything that happens on screen. Thankfully, the action is fluid at all times, and you won’t get the frame drops seen in other portable versions.

What turns the simplistic alien landscapes of Risk of Rain into something more palpable is its brilliant soundtrack. Each level has its own distinct electronic track that seems to bump up with the rising action. The fact that you can take on this high-octane action with a friend on both couch co-op and online turns Risk of Rain into one of the most fun and enjoyable roguelikes available on Switch. An experience that is worthy, despite the genre.

With its minimalistic pixel art style and superb soundtrack, Risk of Rain delivers a roguelike experience in which you’re constantly measuring your risks and going after higher rewards.