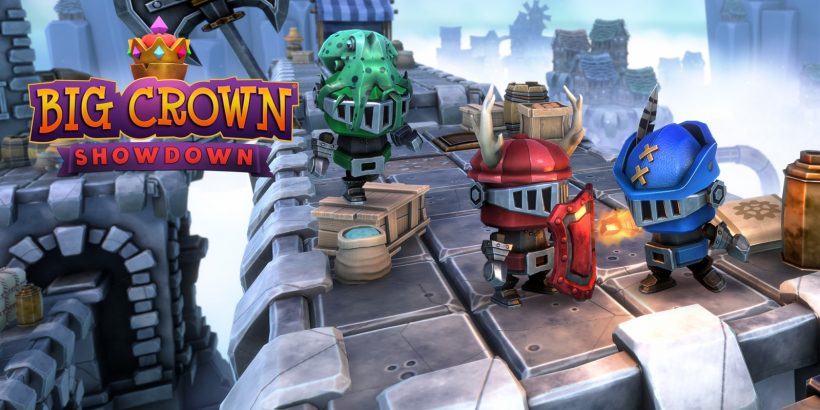 Big Crown: Showdown is a multiplayer centric action/platformer that sees players compete to rack up hordes of treasure while completing death-defying jumps that take you past swinging axes, searing hot blasts of steam and a range of other obstacles.

And it is a whole host of obstacles that you need to watch out for, from conveyor belts that can quickly make you slide off the stage to massive concrete blocks that smash together like a sideways Thwomp. The game is always doing its best to take the player out of the action, and the variety offered in the danger has got to be commended. The level progresses at the camera’s pace – fall too far behind and you’re going to meet an off-screen end. You haven’t got a lot of time to worry about getting back onto the screen, either – just two or three seconds is all it takes for the game to give you the boot.

It isn’t just the obstacles that you need to watch out for as you make your way through the levels, either. Much like in those mini-games in the early Mario Party games, you can go on the offensive, dashing and bashing towards your opponents in the hopes that you might cause them to go off the stage. You get five lives in a session, and you’ll want to retain as many of those as you can while you attempt to strip your opponents of theirs.

Along the way you’ll find chests which contain coin loot that you can spend on aesthetic amendments (basically, hats) that you can apply to your character once you’re back in the lobby. The game’s fifteen levels are enough if you’re playing with friends for a short while, but if you’re sitting with the game for an hour or more you’re likely to feel like you want to see something else.

There’s no single-player mode in Big Crown: Showdown. This is a game that’s all about its party element, and the most fun you can have with it comes when you see your friends fall to their doom as a direct consequence of your own actions. From stamping on icebergs so they crumble when your friends land on them, to smacking them into an oncoming axe, dealing your friends harm is the best bit.

But it’s a heavy drawback that one of the game’s main two modes is rendered virtually unplayable by the almost total lack of an online community. It seemed very difficult to get into a game even when trying at different times of the day. Admittedly, the game is still relatively new to the Switch’s eShop shelves, but with the speed that games are releasing on the service, the developers need to ensure that the game doesn’t down in amongst them.

Big Crown: Showdown is one of those unexpectedly fun eShop titles that’s great to play with friends. A disappointing online experience lets it down somewhat, however.