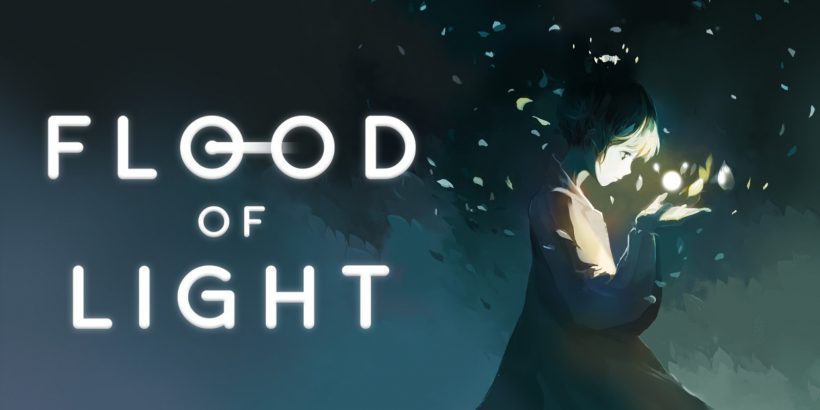 Having recently reviewed Starman, an indie title which made use of light to create a puzzle adventure, there was a feeling of déjà vu when starting Flood of Light. This too has a rather dark standard look, and makes use of tactical illumination of the surroundings to solve the puzzles.

Flood of Light starts at what appears to be the roof of a skyscraper in a futuristic environment. Flood waters have overcome every floor but the highest one, and so levels play out by tasking the player to lower the water level and therefore gain access to the floor below. It’s a satisfying level of progression, and though the gameplay elements remain largely consistent throughout, each level has a closing shrine which much be activated which is named after a different element – these ways of distinguishing levels aren’t as in-your-face as having sand kingdoms and fire worlds in Mario games, for instance.

Light is the puzzling element here, and its execution is a complicated one to describe. Light ‘dots’ must be acquired from street lamps and passed to other bulbs to activate switches and amass collectibles. Provided you have enough light dots in your possession, you can pass light from your character to a bulb, and then on to any other bulbs within radius and repeating with as many neighbouring bulbs as your number of light dots will allow. So, for example, if you start with five light dots and have three bulbs, you establish a chain of light with passes through the first bulb, leaving one light dot, then the next, again leaving one, and then the remaining three all going into the final bulb – therein meaning that wherever your chain ends is where your remaining unused dots will collect.

You know that puzzle where you have to get four litres of liquid only using a two-litre and seven-litre tank? Flood of light works pretty much like that. You need to be careful about the chains of light you create, as if you sent too many dots to a bulb which is out of your reach, your only option will be to restart the puzzle as you won’t be able to regain them. You cannot pass light into an already-lit bulb, leading to dead-ends and light being isolated out of reach. That’s where the difficult element of Flood of Light’s puzzling comes in – You usually have just the right number of dots to activate everything, so one mistake will result in a failure.

Save points at the start of each level are most welcome – playing through an entire level from scratch would be nasty. Playing through without a guide, Flood of Light is a very challenging title, but it works – though it can perhaps become frustrating when you’re having difficulty with it. Just don’t use a guide!

Flood of Light is a challenging but clever puzzler. Some of its tougher puzzles require some head-hurting thinking, but at least a plot twist at the end is strong reward.