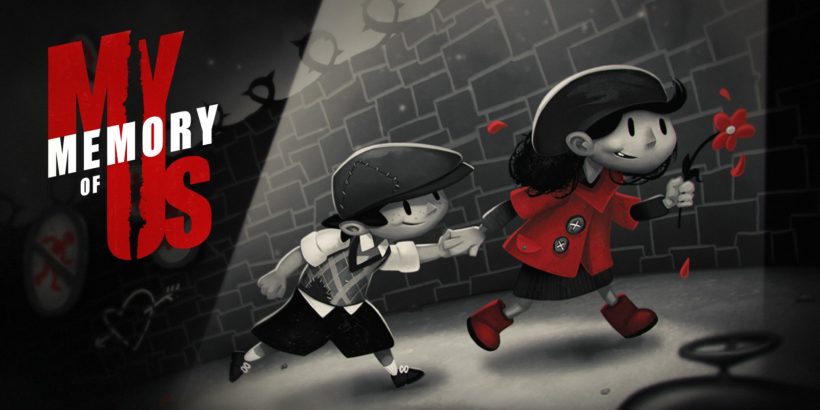 Black and white seem to be the in colours for eShop games these days. Downwell, Starman and Flood of Light have all used the most basic of colour schemes to varying effect, and now we have My Memory of Us.

My Memory of Us is an unorthodox tale about two unlikely friends, a thief boy and a more well-off girl, who have a chance meeting and become best friends. Set during a cartoonish World War II era, the two protagonists’ unique abilities need to be used in tandem to overcome a number of puzzling predicaments through their adventure, as they take on a Steampunk take on the Nazis. The boy, being a thief, is all about being sneaky, and has the ability to tiptoe around guards and the girl is able to run when a change of pace is needed.

That’s crucial in some of the game’s set-plays – running away from guards will require you to bunch the characters together and have them hold hands so you can control both of them at the same time, and you need to think fast in order to execute this. It can be a little fiddly at times to stick the characters in the right place to hold hands, or to remember the buttons to switch between characters, but the game is long enough for you to get a grip of that before the end.

The puzzle elements are very welcome in terms of taking your attention away from the frustration of not being able to bunch the characters up. There are tile-sliders, dancing segments where you need to hit buttons in time and circuit-making sections; not things we haven’t seen before for sure, but they are rarely repeated here – which keeps you tuned in to what’s going on and steers the game away from repetitiveness.

I often criticise black and white games as having taken the easy way out, but My Memory of Us certainly does leave an impression as far as its art style goes. With world illustrations so crisp you wouldn’t be shocked at seeing them in a comic book, that’s the aspect that is most likely to remain with you long after you’ve played through the game, and with the flashes of red illuminating what could otherwise be quite a dull look, the developers have an eye-catching visual experience on their hands.

That red, however, does have a pretty dark explanation. This is a cartoon take on not just any aspect of World War II, but in particular it’s the segregation utilised in the Holocaust. Our female protagonist is marked red as a way of distinguishing her from the Nazi-type arsenal – make of that what you will, as it doesn’t require much further detailing to those who paid attention in History class.

My Memory of Us

My Memory of Us will perhaps be better remembered for its visuals than its gameplay, owing to some frustrating controls. It’s good enough to warrant a place in your Switch collection, though.