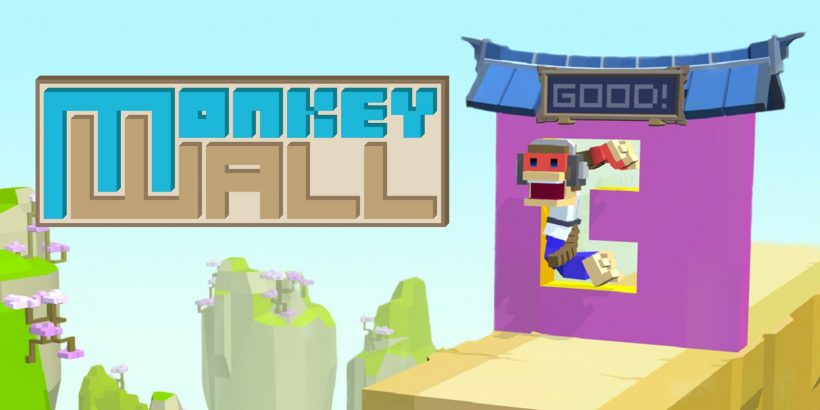 Bring on the wall!

Yes, we got Puzzle Wall on the Switch eShop last year, and it was all about forming shapes in order to pass through holes cut into walls which bear down on you at increasing speed. It harked back to the days of Dale Winton presenting Hole in the Wall, which could be perhaps the pinnacle of all Saturday night TV in the UK to this day. But fans of weirdly constructed walls will be delighted to find out that there is another offering in the Switch eShop in the form of Monkey Wall.

Rather than using the Joy-Con as you had to in Puzzle Wall, Monkey Wall has you selecting squares from the 3×3 grid in order to fill out the shape that’s missing from the oncoming wall. This can go from the simple, where you only have to identify one square to pass through, to the more challenging, where your grid is slanted and makes you rotate it back to upright in your mind before making your selection.

But it gets far harder than that; sometimes you’ll have to fill in loads of squares – even the majority of the shape – with not a lot of time between walls to do it. And the most difficult wall to encounter is one which flicks between numerous different shapes. Your grid will be pre-filled in to an extent that only one of the shapes which is rapidly appearing and disappearing in the distance will match, and with the pressure of the time constraints, you’re likely to just pick and hope, almost inevitably watching the monkey smack his face on the wall as a result.

With speed and accuracy of the essence here, this would be difficult to play using the Joy-Cons or the Pro Controller, and for that reason Monkey Wall is an exclusively touch screen-based affair. The grid is found to the lower-right of the screen with the walls themselves taking priority for the rest of the display, and as a result this always feels like a mobile game. It’s a little awkward, too, for left-handers.

You get assigned a star rating for each successful wall you pass through, and the speed at which you make your decisions. This builds up a meter which adds extra lives and therefore room for mishaps, which comes in particularly handy the further into your run you get. But this is the only gameplay offering here – aside from changing the aesthetics of your monkey and background that goes with each one, it’s a very light package.

Monkey Wall is a basic Switch offering and one of the money which has arrived feeling like a mobile game that out to have taken on some improvements before appearing on console. Young children might enjoy it, but adults will want something more.

Monkey Wall is a wall-based endless runner, but the package is light. After the first run, the novelty starts to go – it’s a good thing it’s cheap.