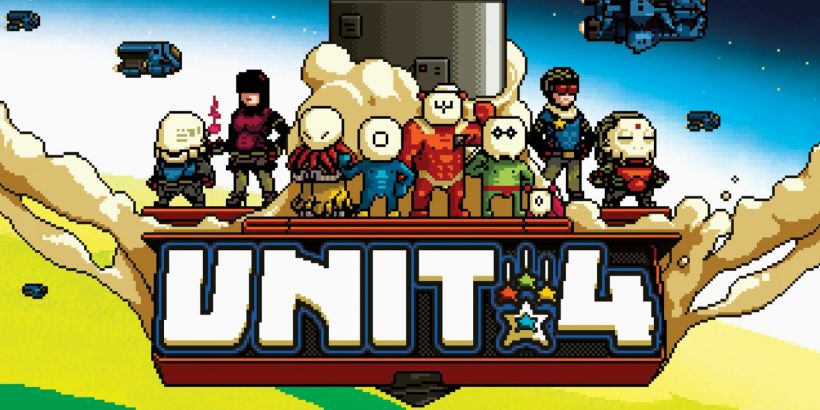 Unit 4 is a 2D platformer set in space, where the hook is the ability to switch between four uniquely skilled characters at will. It’s an interesting gimmick, and clearly developer Gamera Interactive felt it was strong enough to largely forego any real attempt at a storyline. Of course, one could argue that narrative isn’t important if the game is fun. Well, that’s a very big “if”.

While the ability to swap out a double-jumping hero for, let’s say, one with a dash ability could no doubt work well in a more deliberate, puzzle-focused platformer, Unit 4 positions itself at the super-challenging end of the action-platforming spectrum. That in itself is no bad thing – the Nintendo Switch is already home to some fine examples; Super Meat Boy, The Messenger and Celeste, to name a few – but sadly Unit 4 fails to reach anywhere near those lofty heights.

Much of the success of those modern classics is down to the absolute precision of the controls – yes, you will die hundreds of times, but it will always be down to a lack of skill or judgement on your part, meaning you can always improve. This is pretty much the fundamental requirement of a punishing platformer, and Unit 4 gets it horribly wrong.

To begin with, the controls feel awkward during the tutorial – basic platforming mechanics like double-jumping and wall-jumping immediately feel unnecessarily fiddly to pull off. I assumed that I would grow accustomed to this with time, and to a certain extent I did, but it always felt like I was tolerating, rather than mastering, the controls. Even cycling through characters feels cumbersome within the context of such an act-first, think-second game. Without being entirely terrible at platformers, even judging a landing or avoiding enemies feels “off” in Unit 4. Eventually I surmised that perhaps the analogue stick was causing imprecise inputs, but when I switched to the less-than-optimal Joy-Con D-pad buttons, they didn’t work at all.

I would love to say that the presentation goes some way towards redeeming Unit 4, but unfortunately the low-fi art style and drab palette even cause gameplay problems in their own right. It’s not always easy to distinguish between background objects or something that will kill you instantly, for example. The animation even seems sluggish, leading to yet more deaths at the hands of an enemy or pitfall you would have been able to avoid if things were a touch more fluid and responsive.

To its credit, Unit 4 does pack in a fair amount of content, including plenty of traditional platforming levels and mini-games, all of which can be played by 1-4 players. These, alongside some customisation options, are of course welcome, but they can’t compensate for Unit 4 fumbling the basics of what makes a platform game fun.

Unit 4 has many of the parts required for a competent platformer, but is severely let down by wayward physics and unrefined controls.