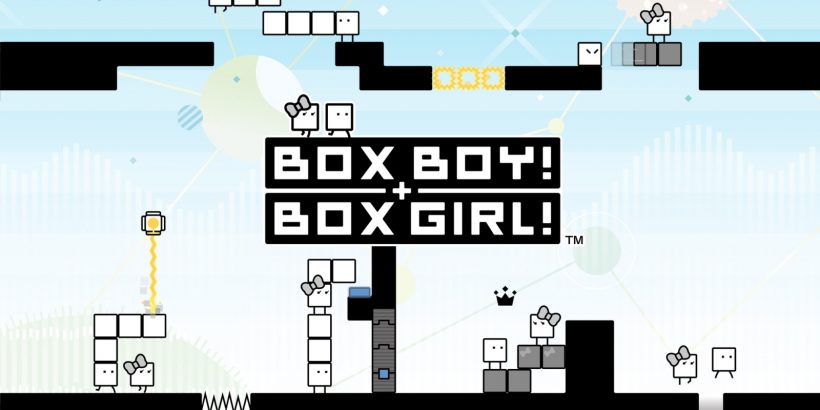 The 3DS eShop saw the beginnings of some great little series. Mutant Mudds and Pullblox were amongst the highlights, with BOXBOY! – a game with several sequels, including BOXBOXBOY! and BYE-BYE BOXBOY! – coming later. This fourth instalment, BOXBOY! + BOXGIRL!, is the first to grace a home console in the form of the Nintendo Switch, and comes after BYE-BYE BOXBOY!, where it seemed the series had been brought to a close.

The lauded gameplay of the series centres on puzzle platforming. Bare basics protagonist Qbby may only be a simple black-and-white box on legs, but his abilities make him a nifty hand at traversing gaps and climbing steep walls. For those unfamiliar with the series, Qbby can generate a set number of additional boxes which can be used as platforms, hooks or anything your imagination can come up with in order to reach his goals.

That’s his core ability, though new abilities are unlocked as you play, including a jump which enables Qbby to plant blocks onto spikes and jump with them to cross what would otherwise be impassable gaps. The ability to ‘slide’ boxes in a straight line until an immovable object brings them to a halt, too, can help solve puzzles in other ways.

That’s by no means an exhaustive list of all of the upgrades which become available. Each upgrade amends the BOXBOY! experience in a way that is probably more effective than any other game that comes to mind, as while many games drip-feed upgrades with the completion of levels, in BOXBOY! the overall feel of levels completely changes with each new arrival.

The game is structured in such a way that players can easily get to grips with these new upgrades, as levels are split into ‘worlds’, each of which focusing on one ability in particular. The trick, though, is to not only master the abilities, but also to use the minimum number of blocks possible to reach the goal.

Higher grades are awarded to those who meet the minimum threshold and pick up the level’s collectibles along the way. The true puzzle is in the expert planning of the shapes BOXBOY! generates, so know that there may be multiple ways to finish any given level.

BOXBOY! + BOXGIRL! sounds like any other BOXBOY! game, it’s true – but the big new arrival here is co-op mode, letting you play as Box Dad and Box Mum as well. Teamwork is encouraged, of course, but admittedly it is far more fun to sabotage each other’s efforts like in Snipperclips.

If you’re looking for genius level design, BOXBOY! + BOXGIRL! has it. Its levels are short, easy to grasp, but often tough to master. It’s the ultimate pick-up-and-play game, though you’re unlikely to want to take the whole thing down in one sitting, as moreish as it is.

BOXBOY! + BOXGIRL! is the best offering in the series so far, and a fine entry point for those without a 3DS. Co-op play is a neat new addition – though the experience is rather familiar for those who have played a BOXBOY! title before.