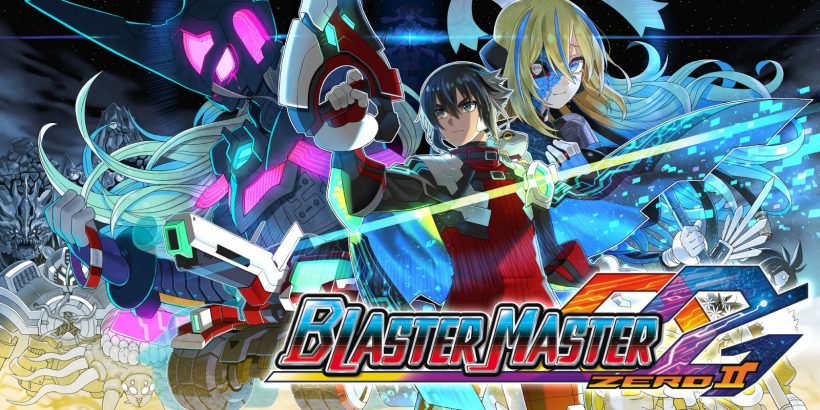 Blaster Master Zero was a week one title on the Switch eShop which cemented itself as one of the console’s earliest hidden gems. This sequel makes the Switch the first system to receive two titles in the Blaster Master series, with previous entries having appeared on the NES, Game Boy Color and WiiWare.

Blaster Master Zero 2 follows immediately on from the plot of the first game. Having successfully defeated the mutant race and prevented them from taking over the world, hero Jason Frudnick has discovered that more of the mutant race have colonised in space, and are slowly taking over other galaxies.

Teaming with a group of scientists who’ve managed to upgrade Jason’s SOPHIA III vehicle to a point where it is able to explore space, Jason’s new mission is an intergalactic adventure to put a stop to the mutants once and for all. There are two different styles of gameplay in Blaster Master Zero 2; side-scrolling sections have you pilot the newly-upgraded G-SOPHIA, while top-down sections allow you to control Jason.

The G-SOPHIA sections function like an action-platformer, as you’ll need to make jumps, shoot enemies and battle your way through level in a side-scrolling fashion. The top-down sections are more puzzle-focused, with the challenges focusing on finding keys or shooting switches in order to progress through the level.

Exploration is key in Blaster Master Zero 2. Like in the first Zero game, the exploration is delivered in the style of a Metroidvania, with sections requiring Jason to get out of his vehicle and go it alone, whether that means fitting into small gaps or going up and down ladders. Jason can then duck into alcoves which shift the perspective to the top-down dungeon crawling. Exploring these will lead you to new abilities which allow access to new parts of the main area and offer better protection from enemies.

There has been no change in the controls from the first Zero game, so getting back into the swing of things here felt like riding a bike. With fun, but often challenging gameplay, boss fights are particularly difficult to master. Taking the time to learn and understand their attack patterns is key, as with a bit of practice, they are easily overcome, which feels both entertaining and rewarding.

Blaster Master Zero 2 is one of the most beautiful 8-bit games this writer has ever played. Environments, characters and enemies all look incredibly unique and well-designed, and the art style shines whether on a TV or on the Switch’s handheld screen. The soundtrack is also excellent, and is rivalled only by Shovel Knight as the best chiptune soundtrack on the Switch.

Overall, Blaster Master Zero 2 is a fantastic and fitting sequel to its predecessor. The ambition and scope of the game builds fantastically on the groundwork the original game established. Often tough but always fair, this title certainly comes recommended as a possible eShop hidden gem.

Blaster Master Zero 2 is a wonderful if sometimes difficult platformer that makes good as a sequel to one of the Switch’s earliest hidden gems. It’s by no means expensive, either; it’s definitely a game worth picking up.