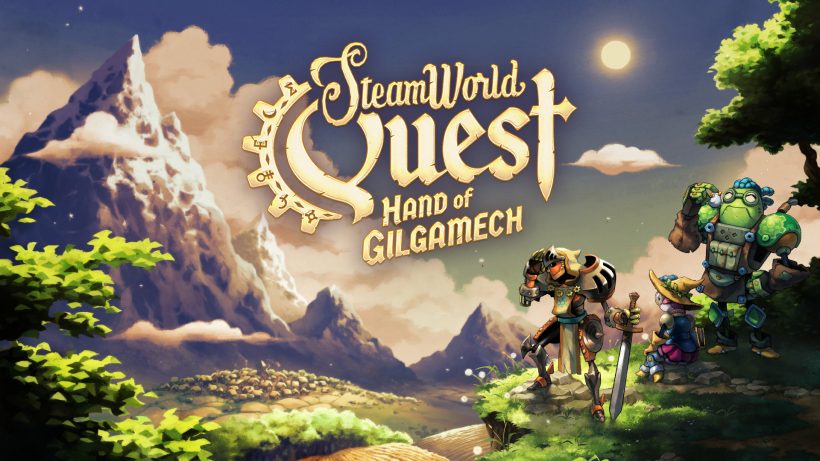 Image & Form are back with another entry in the SteamWorld franchise, this time trying their hand at the RPG genre in SteamWorld Quest: Hand of Gilgamech. Fans of the series, worry not; tackling a new gameplay style has not in any way diminished the charm and quality that Image & Form are known for.

The story of SteamWorld Quest is split into chapters, and delivered by a rather cliche narrator, who suits the chosen RPG style perfectly. In the beginning, we follow a trio of wannabe heroes as their town is attacked by the Dark Lord’s evil army. This army seems to be gathering up all the registered guild heroes, so our unsanctioned party set off to save the day.

Deceptively simple-looking, the story develops into a much deeper narrative with many twists and turns to keep you on the edge of your seat. The character development is exquisite, and the trademark humour of the SteamWorld series is on full display here. As for the gameplay, the game uses a card-based battle system, along with a more traditional RPG levelling approach. You battle enemies, gain experience, and level up your core stats like any other RPG, but when it comes to the actual battle mechanics, things are a little different.

Once engaged in battle, you are dealt a hand of cards, each depicting a move for one of your active party members. To attack, you choose three cards – representing three moves – with your characters then executing those moves. Using a basic card raises your cog meter by one, up to a maximum of ten cogs. Some cards require a certain amount of cogs to activate, similar to how special abilities in other RPGs use up a portion of your mana bar.

Because of this cog system, building and managing your deck of cards is crucial to the overall experience. Each character can hold up to eight cards, and if you don’t strike the correct balance between standard cards that raise your cog meter and cards that use cogs, then you can be stuck with a hand that is useless to you. Thankfully, you can redraw up to two cards per turn – a crucial feature to utilise if you want to triumph against the game’s brutal bosses.

If you use three cards for the same character, then that hero will use a fourth ability dictated by the weapon they currently wield. You can also use various items in battle, but doing so uses up one of your three card selections for that turn. While this system seems simple enough, but there is a lot of depth and complexity here to keep RPG veterans happy.

Outside of battle, the world you explore is a very linear one. There is no real openness here, as this is a streamlined story being told, with no side quests or other activities to engage with besides a colosseum that unlocks late in the game. Enemies are clearly visible while exploring the world, which is always preferable to random encounters.

Artistically, the game is gorgeous, with a cartoony look reminiscent of other SteamWorld titles. Characters look unique and well-crafted, fitting in perfectly against the more nature-rich backgrounds. Watching battles unfold is thrilling, with each attack looking equal parts devastating and beautiful to behold. Such artistic brilliance is mirrored in the sound design, where the clashing of attacks during battle echo poetically from the Switch’s (or your TV’s) speakers. The narrator’s deep voice is perfect for presenting each chapter, with the only real let-down being that none of the characters have a voice of their own, besides some garbled gibberish.

In terms of technical issues, towards the end of the game, some attacks – particularly ones that hit multiple times – appeared to lag, but the performance hiccups were never detrimental to the overall experience. Beyond the late game, there were no other issues in either docked or handheld, so don’t let such minor faults deter you from giving the game a try.

SteamWorld Quest wrapped up quicker than expected, but it felt to be the perfect length, never overstaying its welcome. Battles never lost their fun, perfecting each characters deck was always enjoyable, and overcoming a boss battle that would last half an hour (or longer) was a thrill every time. That said, once the game is over, there is little replay value, unless you want to play through the story again.

SteamWorld Quest: Hand of Gilgamech is beautifully driven forward by a touching and humorous story, while its engaging card-based battle system will keep you entertained. Once the experience is over, though, there is little replay value. Overall, another excellent addition to the SteamWorld franchise.