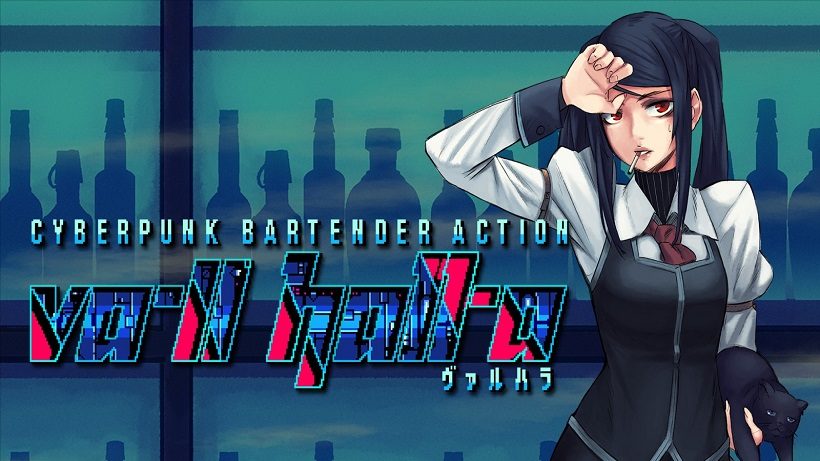 VA-11 Hall-A: Cyberpunk Bartender Action is a mouthful of a title and sounds like gobbledy-gook, but what you need to know is that this is a visual novel centring on pouring drinks behind a bar.

The “bartending action” is the main element that separates this visual novel from others, although the extent to which is not to the same as evidence is used in something like Ace Attorney. Each in-game day, with days broken up by a helpful save-checkpoint, has you make around ten drinks depending on the number of visitors; and how much they want to drink.

VA-11 Hall-A does a pretty solid job, though, of providing a fun experience in the making of the drinks. While you are restricted to what is listed in the drinks menu, with no experimentation possible, the selection is surprisingly broad, and just navigating the menu and the different types of drinks available is impressive. Each drink has a flavour and a type to help categorise it (which becomes more important as you move through the game) and each one has its own unique blend of ingredients required to create it.

Mixing together drinks at first takes a little bit of getting used to (the initial tutorial is very helpful) but soon you’ll be mixing with the best of them. Admittedly the fun of making drinks does quickly become devoid of challenge as you are constantly following a set list of instructions. There are a couple of elements that mix things up a bit, such as some drinks requiring the addition of ice or needing to be aged before serving (this is just the press of a button though). Some also require “blending”, which is complex as the game ever gets, requiring you to mix the drink for a few seconds before serving. That activity is helped by clever use of the Switch’s HD Rumble feature to let you know when it’s ready.

VA-11 Hall-A isn’t afraid to acknowledge its influences, most notably the work of Hideo Kojima, and specifically his visual novels Snatcher and Policenauts (and to a lesser extent “tactical espionage action” game Metal Gear). The whole cyberpunk aesthetic in the game – especially the visuals – is reminiscent of late 80s/early 90s Japanese graphic adventures, but this isn’t just a lazy homage, as the visuals truly match the tone and feel of the game. Even though you mostly just see a slightly futuristic looking bar interior, this, combined with the wonderfully drawn character designs places you into the fictional Glitch city that has been created.

Talking of characters, the patrons that visit VA-11 HALL-A (the eponymous title of the bar you work in) are what make it a memorable experience and does more to add to the bar-tending ambience than just making drinks. These patrons frequent your establishment throughout your time with the game and each time you learn not only a little bit more about their lives, but also more about the goings on in Glitch city, as well as gaining more insight into the player character Jill. 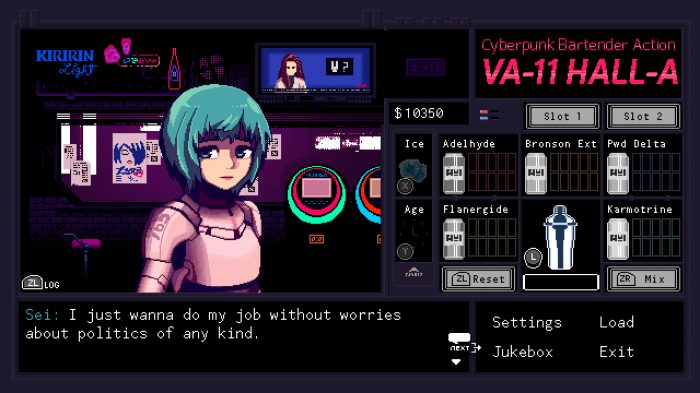 VA-11 HALL-A is unlike anything you might’ve played before, even though ostensibly it is just another visual novel-style game. Like many of its fellow genre compatriots, the trajectory of the narrative is mostly predetermined, and you’re just there for the ride. Yet, the sign of a good visual novel is where, despite this, you still feel like a participant in the story even though you’re little more than an observer.

VA-11 HALL-A might not quite fulfil your bartending dreams in terms of concocting your own drinks, but if the social side of being a bartender without leaving the house is more your thing, then this is the game for you.