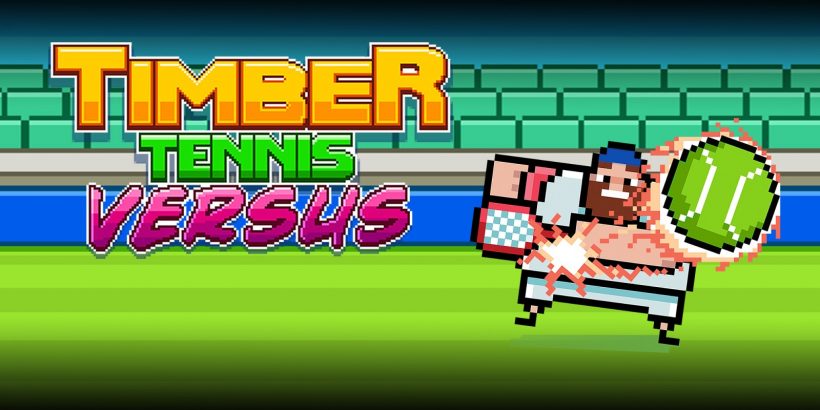 Spending as much money buying a couple of chocolate bars from the local shop on a Switch game might sound like a bargain at first. But when it’s for a mobile game that’s very loosely based on the sport in its own title, it really does make you wonder about the levels of quality control Nintendo employs sometimes. The eShop is bulging at the seams with shovelware already and a linear tennis game like this one isn’t helping with the overcrowding situation.

Timber Tennis: Versus takes the Timberman brand into the world of sport, but really, deep down, all you’ll find is a colourful version of Pong, and that’s quickly evident within the first few minutes of starting it up. There are a few modes to plough through, but the concept is painfully simple: control your chosen tennis player by shifting him or her (or it) left and right at the very bottom of the court; you can’t go up or down. Every court has five invisible columns that you and your opponent can navigate across.

Once you’ve positioned your character in the same column as the ball, there’s nothing left for you to do to hit the shot back across the net. Sure, having minimal control input persuades this game into the ever-growing bargain bin of casual Switch games, but the only time I found myself bumping into anything that resembled a challenge was when I couldn’t be bothered to press the D-pad quick enough – or when I was trying my luck with the left analogue stick.

During a match, gift-wrapped presents will randomly drop to give you the upper hand. Or at least that’s what they’re meant to do. From freezing your opponent in a block of ice forcing them to break free, to spreading ink or paint (I couldn’t tell what it was) that stopped them momentarily from shifting left or right across the court, and things actually got harder. The power-ups do very little in the way to sway the match in your favour, or vice versa.

Beat the CPU in any of the modes like Tournament, Career or Skirmish and you’re rewarded with money. The harder the opponent the higher the reward, and more cash for things like novelty balls to play within the main game and different players, which are often rip-off’s like Gadgy, who looks an awful lot like Inspector Gadget. Changing ‘hero’ yields no benefits whatsoever, other than to show off online. Show off all you please, but good luck finding a player to go up against.

There is some enjoyment to be had, however. Being given the option to freely choose how many sets each game of tennis runs for is certainly a good feature to have included – especially useful for those quick play sessions on the bus home from work. Unfortunately, the simple gameplay being at its most basic and the inability to shift around the court freely make this title less appealing past the one hour mark with even the extensive amount of collectables failing to keep my attention for much longer.

Gamers and non-gamers who prefer the more casual session on their Switch will possibly gravitate toward this. The Timberman franchise is apparently popular worldwide, they say, so having its characters in a completely different setting may appeal to fans of the brand. This still doesn’t detract away from the fact that it’s bland, short-lived and, without someone with you, very dull.

Considering the great things Mario Tennis did for tennis games, Timber Tennis: Versus does nothing of the sort. Only if you want a free mobile game for Switch that gives you pong-like local/online co-op is it worth considering.