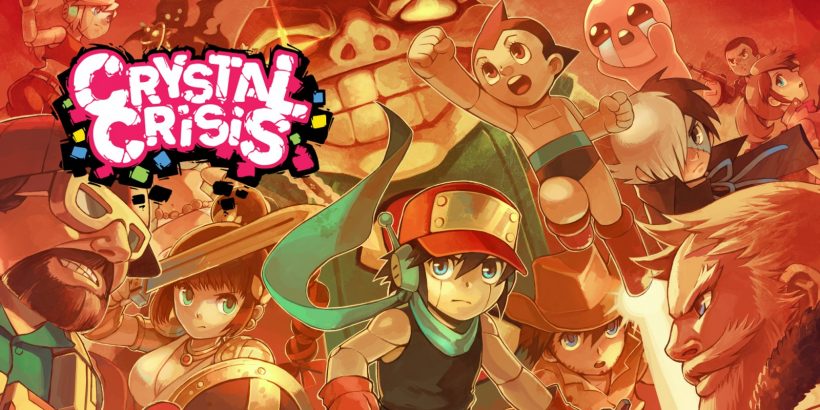 Crystal Crisis is a frenetic colour-matching puzzler, where players do battle with friends or AI opponents in pursuit of the mysterious Red Crystal. These battles employ the familiar best-of-three rounds format popularised by the likes of Street Fighter, and if you’re familiar with puzzle/fighter mash-ups like, er… Puzzle Fighter then you’ll know what to expect from Crystal Crisis. Despite those expectations though, this is a game that’s overflowing with surprises.

The first of those little shocks comes during the game’s hilariously over-the-top introduction, which is brilliantly and unmistakably narrated by Peter Cullen, the voice of Optimus Prime. As well as providing a genuine “what the hell?” moment, this is an early indicator that Crystal Crisis is a premium product. That quality extends to the overall presentation which, while not spectacular, is impressively slick throughout. The crisp simplicity of the graphics is not only easy on the eye, it also allows for the frankly fantastic gameplay to take centre stage.

Crystal Crisis builds upon the classic match-three formula by adding several unique gameplay twists. The most prominent of these mechanics is that clusters of a specific colour can only be cleared when a Spark Crystal is placed directly next to them. This provides an opportunity to line up chains of each colour to trigger a combo, quickly filling up your Burst Meter whilst dumping Countdown Crystals into your opponents’ grid. These Countdown Crystals differ from traditional garbage blocks as they will eventually turn into regular, usable crystals when the number on them (which decreases with each turn) reaches zero.

Another unique addition to the genre is that the edges of the grid allow for wrapping, meaning if you’re presented with, let’s say, a yellow and blue block, you could push the yellow half over the right-hand edge and it will then appear on the left of the grid, leaving the blue half on the right. Splitting crystals in this manner is the sort of advanced technique that will no doubt give the competitive edge to anyone who cares to master it. All of this, coupled with the panic which sets in when approaching the top of the grid, makes for a thoroughly entertaining blend of strategy and reflex-testing madness. What’s more, if this all sounds like a lot to take in, the tutorial – presented by Johnny Turbo, no less – explains everything in just the right amount of detail.

Although the tutorial does an admirable job of explaining the basics, it should be noted that the skewed perspective of the default view does make aligning crystals slightly more fiddly than it needs to be. Thankfully, you can easily turn this view off, which then places your crystals on a more manageable 2D grid. My only other gripe with Crystal Crisis is that the loading screens take much longer than one would expect from such a relatively simple game. Thankfully, the candy-coated presentation and the odd cheeky hint, such as “Eat your broccoli” or “Beware of penguins” do at least serve as an endearing distraction while you wait.

The twenty-strong roster in Crystal Crisis pulls from several disparate franchises, including Cave Story, The Binding of Isaac and Astro Boy. Character selection is more than skin deep though, because each has their own unique Burst Powers which can quickly turn the tide of battle. My personal favourite here are Isaac’s abilities, which seem to be selected completely at random; a knowing wink towards Isaac’s procedurally generated roots. That chaotic randomness aside, learning the defensive and offensive moves of each character brings a strategic depth that encourages experimentation, almost demanding that you don’t simply pick your favourite character and stick with them forever.

Crystal Crisis doesn’t rest on its laurels by merely offering top-notch gameplay and a host of characters though. Players are also spoilt for choice when it comes to game modes and customisation options. Unlocking these, along with the characters themselves, provides a great deal of longevity. As one would hope, there’s also the option to go online for ranked, unranked and friend matches, although unfortunately I was unable to connect with an opponent prior to launch day. What I can say is that if Nicalis can match the offline experience in online multiplayer, and maybe drop some DLC down the line, then they will have a cult classic on their hands.

Crystal Crisis is a joy to play and boasts a surprising amount of depth. If you have any interest in fast-paced puzzlers, I would file it alongside Lumines Remastered and Tetris 99 as an essential addition to your Switch collection.