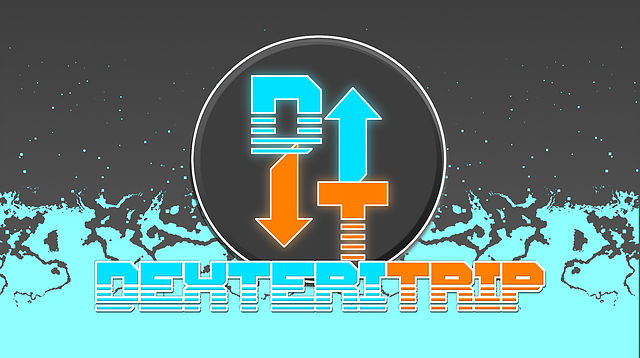 Dexteritrip is an attempt at a hard-core and fast-paced platformer. In execution, it’s a painful bore.

The main mode, titled “Kill Them All”, provides a sequence of challenges that are presumably designed to kill all of your enjoyment. The first problem is the wonky way you interact with the levels. You can move back and forth, as well as jump and shift gravity. Shifting gravity will move you to the top of the screen and you’ll play upside down. Your health, limited by collectables you pick up and enemies you kill, limits your jumps; each will cost you a life which forces you to play economically. The enemies are solid blocks of orange that move a few paces back and forth; jump on them and they’ll dissolve, and kill them all to secure progression to the next level. It sounds simple enough, but the execution is painful.

Actually moving in Dexteritrip is an absolute chore. Movement feels disconnected from your input. You can’t make use of the D-Pad. Neither the D-Pad on a pro controller or the button D-Pad on a JoyCon function. It’s the analogue stick or nothing. This is a baffling choice for a 2D platformer and feels more like an oversight than a design choice.

You have no control when moving and jumping. No matter what movement you make before jumping, the second you hit that button you’re launched into an arc in the air that is identical every time; it’s a pre-set arc from your current position that you can’t influence at all. This disconnects the player entirely from the feel of controlling the character. It also goes directly against decades of muscle memory for platformers. Going against the grain isn’t always a bad thing, but in Dexteritrip it makes the core gameplay irritating and unresponsive.

Each level contains enemies and projectiles, obstacles, or pipes that move you around the screen. The projectiles are obnoxious. They take off a whole life and can knock you out of your jump arc. Since you can’t control your character at all while jumping, being knocked slightly off-course by the constant projectiles means death. Dexteritrip wants to be a hardcore platformer, but its difficulty comes from cheap tricks like this.

There is another mode called “Keep the Flow” – barely even a game, more a tech demo of basic gravity and a 2D block – where you use gravity shifts and jumps to keep your character permanently in the air and dodge obstacles. This repeats for far too long but the gameplay doesn’t grow beyond that basic premise. You can manoeuvre in the air here. This mode is actually an improvement on the controls. It’s a shame that it’s so underdeveloped that it barely warrants opening.

Dexteritrip’s design is minimalistic. Like other aspects, this wouldn’t be a problem if it wasn’t done with such carelessness. Even in absolute simplicity, it’s inconsistent. The projectile cannons and platforms each have thick black outlines around them, yet, nothing else in the game does. The cannons are otherwise identical to other enemies, aside from a massive cartoony outline. Even with visuals consisting entirely of block colours and simple effects, Dexteritrip can’t keep it consistent.

Furthermore, two-player mode just puts two players in either game. This makes every environmental annoyance a lot worse. The only real use for this feature is deliberately annoying someone by making them play a terrible game.

Dexteritrip fails in every area. The controls are disconnected, forcing an obnoxious difficulty. The visuals are dull yet still confused and so this game isn’t even worth its low price point. If it was free it would be a waste of storage space.