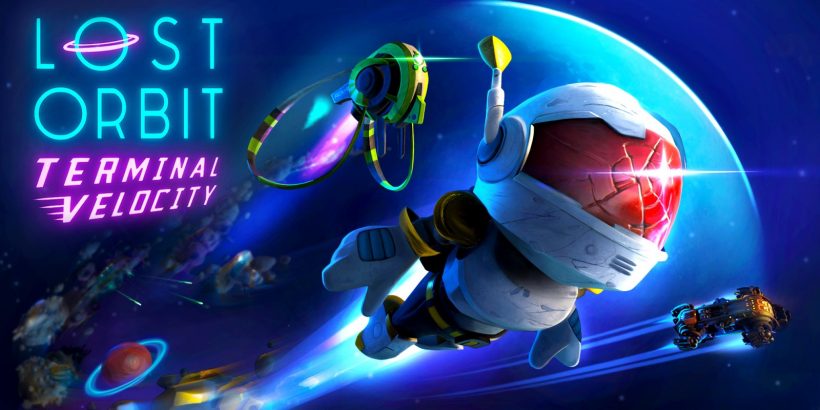 If you were marooned in outer space with no ship, no snacks, and absolutely nothing left to lose, you may take a risk (or twenty) to try and make it back home. That’s the premise of Lost Orbit: Terminal Velocity, the new action-adventure title on the Switch eShop from PixelNAUTS.

Involving fast-paced gameplay and a fully-narrated script, the main campaign is split across four themed solar systems that you must cross to make it home. These systems are built of distinct levels, and unsurprisingly, early levels start off pretty basic. As far as introductions go, however, the pacing is perhaps a little more sluggish than what you’d normally expect from this type of game. In fact, things don’t get exciting until you’ve hit the second solar system, where within the first few stages you’re positively being inundated with new mechanics. While this might be a welcome change from the slower first system, the inconsistent introduction of new challenges was an issue that cropped up again and again during my playthrough.

Pacing aside, there is a lot to enjoy from the mechanics themselves. Not only is there an impressive number of different challenges, there’s also plenty of creativity on display. In the main campaign, mechanics include things like warping wormholes, planets made of fire, pulsars that change your direction, and purple speed boost planets, not to mention classics like lasers, turrets, and similar dangers to avoid. The epilogue is an additional full-length chapter, with plenty of new and, uh, explosive mechanics to look forward to as well.

Although the game handles these combinations decently, the more involved levels do suffer for the higher demands on the system; rather than simply a dropped frame rate, the game will skip for a split second. This caused me more than a few deaths; overcorrections are frequent due to the rather sensitive (and unadjustable) controls, so it can get pretty frustrating.

Unfortunately, Lost Orbit’s gameplay is further undermined by a handful of questionable design decisions. For example, the game has a heavy focus on high scores and ranks, but the HUD omits information that is crucial to your ranking, such as your current time and number of deaths. Likewise, going for platinums on each stage is actually a fairly laborious process, as restarting levels from the very beginning of a stage rather than a checkpoint involves a lengthy loading time. Additional issues such as the inability to access the upgrade menu from the level-select menu are head-scratchingly weird, while the return to the level select screen after every single stage further hobbles the already-inconsistent pacing.

Criticisms aside, the game does offer plenty of content, as there’s a challenge mode and a time-trial mode in addition to the main campaign. There’s also a small amount of customisation available; while some of the upgrades are more useful than others, you can re-spec at any stage if you’re not loving your current skills.

The graphics and audio are on the whole great, with exceptions: the narrator’s one-liners which are delivered upon your death do get fairly annoying, but you can mute the narration if they bother you. Likewise, the music itself sounds rather tinny on the console’s speakers, so audiophiles may prefer to play with headphones.

Once you get past its sluggish start, Lost Orbit is somewhat moreish. Even so, it never quite manages to overcome its various flaws, so keep this in mind if you’re on the fence.

Lost Orbit offers a solid experience, but intermittent performance and some curious design decisions take some of the shine off this title. Still, with over fifty individual levels plus a time trial mode, there’s no shortage of content on display.