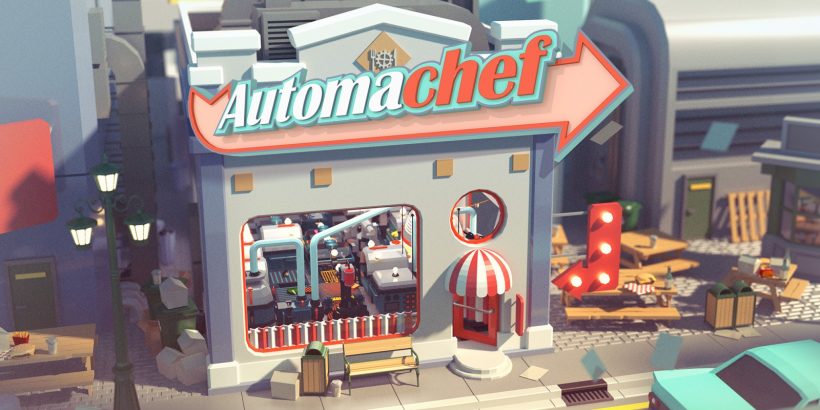 Being the chef of a kitchen is a daunting task, demanding that you serve as many clients as possible within a limited time frame – or, at least, this is the picture that most cooking games seem to paint. Some of them, such as Taco Master and Cook, Serve, Delicious!, are focused on mastering recipes and becoming the fastest chef you can be. Others, like Overcooked, focus on a party-like experience, where chaos is welcomed as a challenge .

While time and chaos are also ingredients of Automachef, this is a title which brings something totally unique to the theme. By transforming the kitchen into a true mini-factory, the game is more about puzzling than cooking – which is, in fact, a great thing.

Automachef’s campaign centres on a goofy premise, resembling something like Invader Zim – just replace the alien with an ironic robot named Robert Person. His ultimate goal is the same – world domination – but his methods are quite unique. Robert wants to control the world by convincing humankind to replace normal kitchens with his industrialised food factories. In order to achieve that, the player must assist him by building different kitchens, which grow progressively more complex as new recipes are introduced.

Gameplay-wise, Automachef follows a similar structure to puzzle games like Infinifactory and Opus Magnum (or Rogue Galaxy’s factory mini-game) where you need to work directly with the logic needed to create a production line. In most scenarios, at first, all you have is a description of the recipe and an empty room. The recipe determines which ingredients you’ll need (bread, meat, vegetables, etc.), how many, and what the steps necessary are, such as cutting, heating, or mixing.

With those short descriptions as your only guide, you then need to fill the room with whichever machines necessary to create the meals your clients desire. The process of kitchen building can be very slow and methodical, as each piece of machinery has its own set of rules. Similar to in a factory, you can utilise means such as conveyor belts to move things between machines. However, some machines will need to be connected to robot arms, and other specific equipment to work properly.

It all gets even more complex when you need to set specific commands to some parts. To be more efficient, you need to pretty much program the machines to work in a specific way. Additionally, some of Automachef‘s most interesting – and frustrating – mechanics are that it limits your money and energy, or introduces issues like fires and food poisoning into the kitchen, deviating from the typical problem-free norms of cooking games. As such, Automachef can be quite an unfriendly game. This is especially true at the later stages, where new pieces of equipment are introduced without proper tutorials.

Automachef‘s whole process of planning, building, and testing kitchens is presented in an enjoyable, engaging graphical style, where it looks as if you’re constructing a miniature toy factory. In addition to the mind-breaking main campaign, the game also offers an additional contract mode, where you need to ‘survive’ as long as possible and construct kitchens in record time.

If you enjoy the challenge of constructing something from scratch, and revel in seeing it work as intended (mostly), then Automachef can be a complex but rewarding puzzle game for you. It doesn’t do the best job of presenting some of its more complex rules, but it can be extremely rewarding to learn them anyway.

Automachef is a slow and methodical puzzle game that is at times unfriendly due to the lack of tutorial. Nevertheless, it can be quite rewarding to try things yourself and learn all the rules when creating a mind-bending food factory.