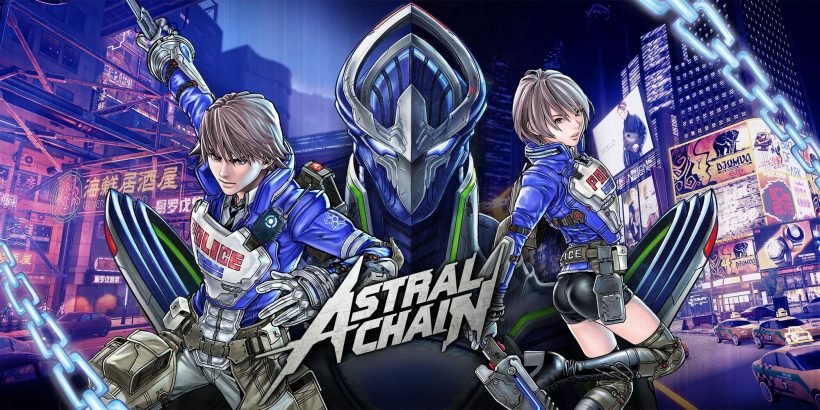 You can always rely on the creators of Vanquish, Bayonetta and Nier: Automata to deliver a slick and stylish action game that doesn’t quite feel like any other, but in Astral Chain PlatinumGames has made this its primary directive. The Switch exclusive has been at the top of many people’s ‘Must Play 2019 Games’ list for a reason, so it says a lot that this JRPG action-adventure may likely even exceed such lofty expectations. This is mainly because laying down the law in a cyberpunk metropolis never ceases to be fun, especially with your Legion companions in tow.

The story of Astral Chain takes place in 2078, where what’s left of humanity finds itself in isolation on a far-off settlement called The Ark seeking refuge from an invading alien race called the Chimera. Such a setup is sure to be standard fare for anyone familiar with anime tropes, yet it works well enough to explain why there’s a need for a Neuron sub-division of super cops, of which you are one. As one of these rare breeds your customisable character can wield what are known as Legions: living weapons born in the Astral Plane and tethered to you to be used as a force for good.

Yes, Astral Chain isn’t afraid to repeatedly dip you in its wacky lore, but such outlandish fictional concepts are forgivable when most of them eventually translate into gameplay. The best example of this are the Legions themselves, which act as the game’s ingenious centrepiece. Primarily used as your close ally during battles, they’ll attack enemies autonomously when summoned and are also essential for Astral Chain’s brief moments of light traversal. You’ll start off with just one in your arsenal, the Sword Legion, but there are four more to collect – which we won’t spoil here – each boasting their own unique skill trees, special moves and unlockable abilities.

The one drawback of having so many combat options is that there’s a lot of button combinations to remember – especially once you gain access to all five Legions towards the late game. ZL quickly becomes your best friend, however, due to it being the button that lets you both summon and then manually control your Legion remotely in tandem with the right stick. Remembering to, say, press Y to switch between Legions or recall which one of them is needed to solve specific puzzle types takes a bit of getting used to. It’s fiddly, but never irks to the point that it becomes cumbersome; it’s more so a testament to how much flexibility Astral Chain offers as a combat-driven JRPG.

You yourself can deal damage using three basic weapons: The X-Baton, Gladius Blade and Blaster. The first of these works as the snappiest way to hack and slash at chimera, but alternatively the hulking Gladius Blade feels immensely satisfying to swing and lets you join your Legion in doing some of the heavy work. The Blaster, by comparison, is a necessity for whenever you get swarmed by out-of-reach enemies. All three can be swapped out on the fly during battle at any time, readily upgradeable as you progress, much like your Legions.

Of course, the eponymous Astral Chain makes for some cool gameplay dynamics too, whether you want to spin it around enemies to immobile them or catch and then fling them up in the sky to catch a breather. You’re always encouraged to time attacks and manoeuvres in line with whatever Legion you have equipped, reinforcing the whole ‘bonding’ theme. Some ideas are lifted from other PlatinumGames franchises (Bayonetta’s Witch Time dodging is here in full force), but unlike some others you’re never graded after each encounter. That’s because Astral Chain is far more interested in having you fall into the rhythm of a certain combat synergy. You’ll gain XP which boosts your Police rank, but you’re never at risk of being showered with poor feedback.

I mentioned earlier that Legions are vital for traversal, but this is only a small taste of how your bonded companion comes in handy outside of battle. You see, you are a cop after all, and Astral Chain sees you undertake light bouts of Arkham-esque detective style work in some chapters, helping to break up the typical action beats that form the bulk of the experience. It’s here where they’re used to analyse clues, remove harmful red matter from suffering citizens, as well as to solve certain environmental puzzles needed to progress. Some objects in the world can only be interacted with using specific Legions, ensuring there’s always something different to see every time you return.

Despite being less powerful than competing console platforms, Breath of the Wild proved right out of the gate that the Switch can be home to some truly good-looking games. Astral Chain only bolsters this fact further, doubling down on its part cell-shaded/part anime art style to look spectacular whether you want to play docked or in handheld mode. Granted, Astral Chain might be a more linear affair compared to another PlatinumGames title like Nier: Automata, but this in no way lessens the feeling of pure badassery you get whenever stylishly laying waste to legions of chimera. Every location you visit throughout each file (chapters, essentially) feels quite open overall.

Astral Chain holds the potential to be the next great action franchise from PlatinumGames. Not only does its combat expertly ride the fine line between being technical and comprehensible, but it does so while exuding a highly polished confidence that’ll have you thinking this is a series already on its third or fourth entry. The tethered companion conceit offers a great new spin on what would otherwise still have been a satisfying and inherently stylish third-person actioner. Never mind the Legions, it’s your Switch you’ll be chained to from the moment you begin playing.

Astral Chain is one of the most confident, stylish and satisfying third-person action games we’ve played in quite a while. While its narrative might be melodramatic, battles and enemy encounters always deliver a thrilling but balanced challenge.