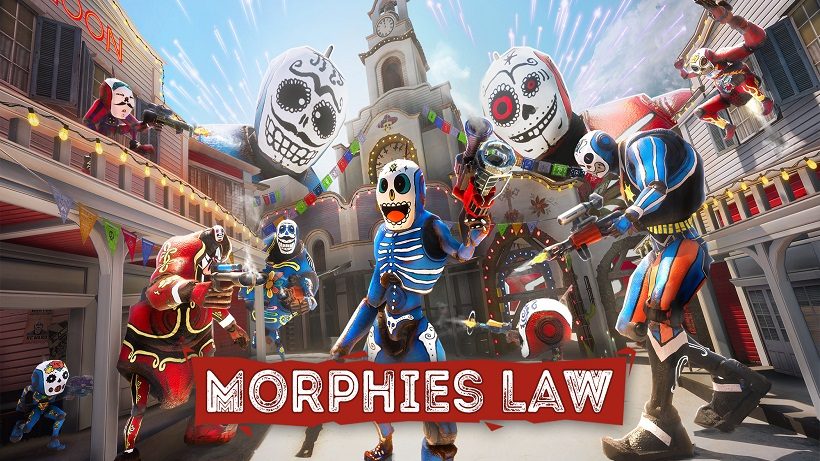 When it was first revealed, Morphies Law was touted as one of the more innovative third-party multiplayer offerings for the Switch, back when the idea of something big AAA shooters coming to the system seemed like a joke. However, when the game released, it was to little fanfare and general shrugs all round.

Rather than settling for the mediocre response, developer Cosmoscope took the feedback on board and went away to provide a solid 2.0 version titled Remorphed. In terms of features though, it is difficult to highlight the significant changes aside from increased stability of online play and the introduction of cross-play with Steam. Yet, this isn’t a criticism, as this feels like a fully fledged multiplayer game. It contains daily challenges akin to many other online shooters, but fear not, there are no micro-transactions to be found, though there are loot-box style pinatas where you receive cosmetic items (more on this shortly). Everything is unlocked via play and many items are tied to your level, which increases through match earned experience.

Morphies Law is a 3v3 shooter that focuses on your Mexican-themed robots whose proportions morph depending on which body part of an opponent morphie. To explain, if you get shot in the head, your head shrinks, making hitting it a more difficult challenge for your opponents. This sounds like silly fun, but it does have a bigger impact to gameplay beyond just becoming either more easy or difficult to shoot at. Being smaller makes it possible to access hidden routes to sneak up on opponents, as well as letting players traverse the map via pipes. Being bigger, on the other hand, makes it possible to jump further, and when combined with the “buttrocket” helps you escape from fights to get the higher ground.

There are other implementations of the morph ability that tie directly into the different game modes available. Mass Heist requires you to steal mass, not from the opposition morphies, but instead from the massive avatar representing each team that looms over the map. After taking the fight to the opposing avatar, you can then donate your accrued mass at one of the altars on the map to give it to your team’s avatar. But, be warned, this extra mass makes you a prime target for other players, leading to a capture-the-flag style of gameplay.

The game leans heavily into the Mexican Day of the Dead theme, and whilst the connection between this and morphing robots doesn’t sound like a match on paper, in practice works very well. Recalling the likes of Guacamelee, the theme is consistent throughout the handful of maps and the customisation of your morphie. As you level up you receive pinatas which you break open to receive three different cosmetic items to customise the look of your morphie, and this helps the matches become more distinctive as it gives each morphie their own recognisable look.

At times, despite the different objectives, the game does feel a bit like playing Splatoon. This is most likely due to the similar control scheme; with motion controls on by default. Whilst the execution isn’t quite to the same level, Morphies Law is a solid team-based shooter that feels at home on the Switch.

Morphies Law: Remorphed is an entertaining online multiplayer shooter. There might be others out there which offer better shooting experiences, but this is distinctive enough to make it a worthwhile use of your time.