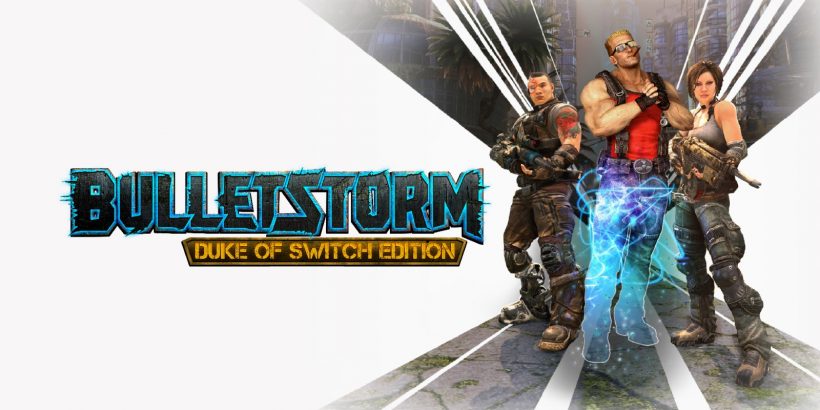 Each console generation has its own trends – certain genres and/or mechanics, that are present in pretty much every AAA title. Nowadays, for instance, a great portion of the mainstream games have open worlds, RPG elements, and loot mechanics. In contrast, last generation was home to many cinematic, linear, FPS titles – of which Bulletstorm is one.

A port of the game has shadow-dropped onto the Switch as the Duke of Switch Edition, and despite presenting an experience from the past, it feels surprisingly refreshing. If you’ve never heard of Bulletstorm before, the most obvious comparison would be with something like the 2016 DOOM reboot. Here, too, you control an edgy protagonist, a kind of killing machine, whose main purpose is to cause mayhem.

With a heavy focus on gameplay, Bulletstorm’s narrative definitely isn’t the main appeal of the game. Different to the silent DOOM-guy, though, you follow realistic vocal characters with backgrounds, desires, and personalities. Nevertheless, your adventure across the Stygia planet feels like an action-packed amusement park – in a good way.

Compared to modern titles, Bulletstorm may sound like a limited experience at first. During its eight-hour (ish) campaign, you go from point A to B with barely no room for exploration nor any kind of side mission style content. Yet, the game delivers a thoroughly enjoyable experience, all thanks to its slick controls and one of the best gun feels of any FPS on the Switch. Each weapon in Bulletstorm is fun to use, easily compensating for the limitations of its linear campaign through its sheer “fun factor”.

Bulletstorm’s gameplay goes way beyond the use of guns to dispose your enemies, however. Thanks to creative gameplay mechanics and a system that rewards the most elaborate kills, players are constantly encouraged to make use of an ever-growing set of weapons and skills. At the very beginning, for example, you get access to a kind of technological lasso, which you can use to pull in enemies or breakable items. By mixing that with other creative weapons (in Bulletstorm, a sniper isn’t just a sniper – and that goes for your complete arsenal) you can perform all kinds of crazy kills, in a maelstrom of creative mayhem.

This Switch version has a new addition that combines perfectly with the mayhem of the game: you can choose to play the entire adventure with the old-school FPS hero Duke Nukem. In this new mode, the protagonist Grey is replaced with Duke, and this adds a whole new humorous layer as all of the other characters still act as if they’re talking to Grey. This results in some very quirky interactions where Duke seems to be the only character aware of the true situation at hand.

Despite being a last-gen game, the world of Bulletstorm has some truly awe-inspiring landscapes, which are beautifully represented on the Switch, no matter whether you are playing handheld or on the big screen. The game runs smoothly in pretty much every situation, even when the screen is filled with enemies and explosions. With its decadent cities, nature-infested resorts, and mutant-filled caverns, Stygia is a very interesting place to visit.

On the whole, if you consider only the structure of Bulletstorm‘s campaign, it may sound like an outdated and limited experience – one that doesn’t offer the same openness you’d expect from a modern title. Still, its moment-to-moment gameplay is compelling enough to compensate the linearity with frantic and thrilling action. Don’t miss out.

Bulletstorm’s linear campaign feels like an amusement park where you go from point A to B with explosions happening all around you – and that’s extremely fun. It’s definitely worth revisiting, or visiting for the first time, on Nintendo Switch.