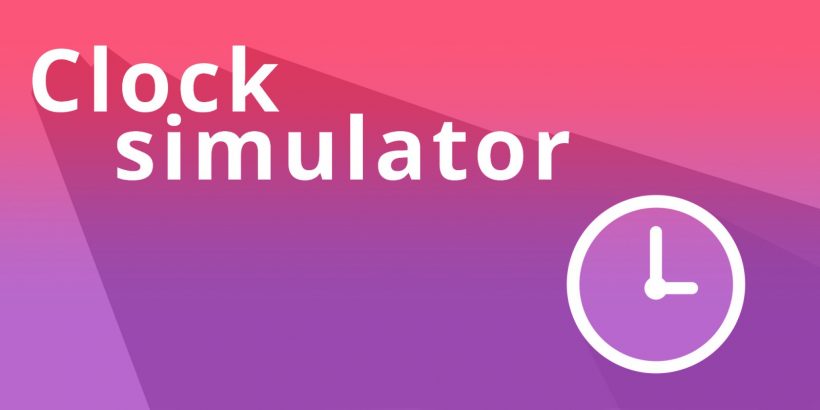 Clock Simulator is a rhythm game with a minimalist art style paired with experimental music tracks. Across most of its modes, the main objective is to mark the second – every second – on the second. Deceptively simplistic-sounding, this is much more difficult than you might think. What started as a mobile game by Kool2Play has been ported to the Switch with the addition of two multi-player modes.

In the tutorial, the second hand acts as a gauge that turns from red to green to signal the correct time to press a button. If you press the button with the correct timing, you’ll be told “great”; but if you miss, the second hand will grow shorter until it disappears and the game ends. After you finish with the tutorial, there are a variety of modes to choose from. Most of the game modes stick to the formula of pressing a button every second, some with very rigid timing. There are, however, a few that change things up just a bit.

Dungeons and Aliens, for instance, has you press the corresponding button for whatever image pops up. The images appear in different colours in order to trick you into pressing the wrong button. This fast-paced mode is certainly a refreshing change from the quickly monotonous theme of most other modes. It’s the only mode to implement colour as part of the challenge alongside time and reflex.

It’s XYAB Time is another example that falls outside of the usual theme; prompting you to hit X, Y, A, or B as quickly as you can before poor little square pig gets pushed off the stage. It has a quick pace, but not frustratingly so.

In A Minute of Perfection, the clock is like a pie-chart that uses colour to represent your accuracy throughout a one minute game; red for errors and green for success. Test Your Skill is a little less demanding and awards or penalizes varying point values based on accuracy. Getting to clearly see your actions impact the game and being rewarded/penalized makes it so much more fun.

The two multiplayer games created for the Switch are Last Pig Standing and Clock Fight. Last Pig Standing has you and friend jumping over the second hand of a clock to see who can outlast the other. The second-hand goes at a slightly slower pace; making it more forgiving and fun to play. Clock Fight allows players five mistakes. The timing is brutally exact in this one. It doesn’t help that you can start at different times either; making it incredibly difficult to keep the game going past a few seconds.

An interesting find when playing was that you could only use B when you first load up the game; any time after that, it will cancel out to the main menu (except for It’s XYAB Time) while the + button will take you back to mode selections. This also happens while playing multi-player, which led to the discovery that the buttons do not reconfigure when switching to single joy-con mode (B is still B and A is still A). This could easily cause some confusion when first playing the game, as the B button’s initial purpose has changed without explanation.

All-in-all, Clock Simulator seems like a forced-fit on Switch. The added multi-player doesn’t justify the higher console price and there’s little reason to play it on a system that offers so many arguably better options.

Clock Simulator is a somewhat challenging but often repetitive rhythm game that lacks the necessary motivation to keep it interesting for long. The addition of multiplayer also fails to give it the extra time it needs.