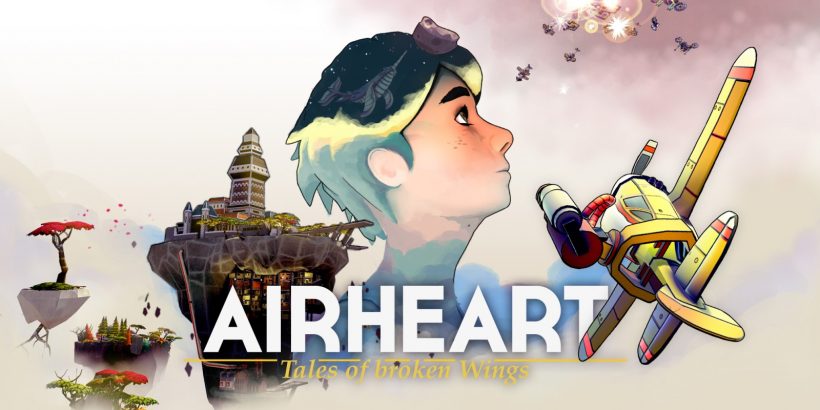 Airheart – Tales of Broken Wings is designed to get you dreaming big. With a protagonist by the name of Amelia and a setting in the clouds, the reference to the intrepid Amelia Earhart invokes a longing for adventure and the wide-open sky. It’s disappointing, then, to find that this roguelike twin-stick shooter fails to live up to its lofty ambitions.

Amelia is a resourceful fisherwoman whose ambition is to take to the skies and track down a skywhale. It sounds good, but whether the game will actually provide you with the opening sequence for this narrative groundwork is seemingly up to chance. My first file skipped it entirely, and it was only upon starting a second profile that I was given the narrative context for the game. Regardless, it’s fairly underdeveloped, and Airheart doesn’t do justice to Amelia’s motivations.

This is a shame, as the actual gameplay itself is also unlikely to draw you in for long. Essentially, you must venture out into the sky and collect fish, oil barrels, and scrap from defeated enemies; after each run, you can craft upgrades for your aircraft using the scrap you’ve collected, which will allow you to progress further and further each time.

While this may be a reasonably solid formula, its implementation in Airheart leaves much to be desired. The runs themselves are fairly repetitive, particularly at the beginning when your low HP and basic gear prevent you from making any sort of meaningful progress. Indeed, there’s a lot of grinding before it’s possible to get the upgrades that will let you venture further out into the sky.

That said, there is mild enjoyment to be had as your skills improve with practice, and the game offers boss fights which provide something of a challenge along the way. You’ll rarely (if ever) go into these fights with full health, due to the fact you must complete every run in one go; this may be frustrating for those who aren’t used to this type of gameplay, but for others, it may provide an interesting and enjoyable challenge.

On the other hand, the crafting mechanic is trial-and-error at its blandest. Requiring you to throw combinations of raw materials together more or less at random until you end up with a useable upgrade, the system is frustrating and slow to use. However, as progress is tightly linked to your upgrades, there’s absolutely no avoiding it.

What can be said for Airheart, though, is that it’s gorgeous. The game maintains a top-down perspective for the most part, and each level takes the form of a ‘skylayer’ that gets superimposed upon the last. As you progress upwards through the sky, the map becomes increasingly more detailed, with plenty of vibrant detail to enjoy.

That said, the beautiful visuals do come at the cost of smooth gameplay. Airheart struggles to maintain its framerate when dealing with too many enemies at once; from about the fourth level onward, you’re guaranteed to experience stuttering as the game just can’t keep up. This is a major shame because the visuals were perhaps the only thing that Airheart had going for it.

Thus, Airheart – Tales of Broken Wings is something of a missed opportunity. It fails to deliver on its promised narrative and the gameplay will leave you wanting more. As far as twin-stick shooters go, there are plenty of better options out there on the eShop, so steer clear unless you’re a die-hard genre fan.

The repetitive, grindy gameplay in Airheart – Tales of Broken Wings leaves something to be desired. Unless you’re a collector or a hardcore fan of the genre, you might be better off steering clear.