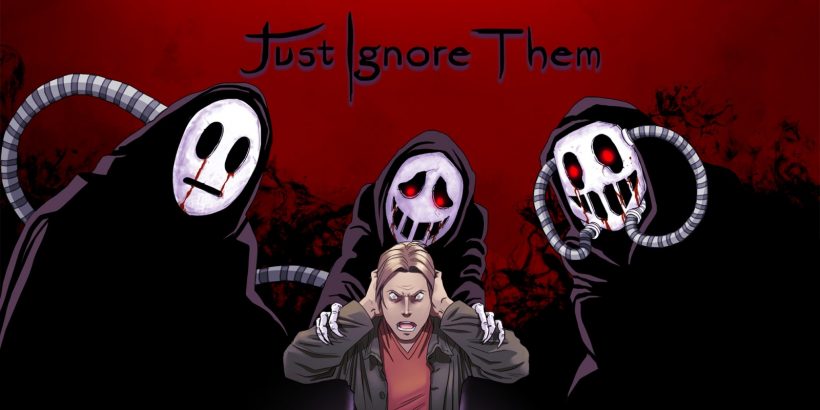 Point-and-click adventure games require few elements to make them an enjoyable experience. A great narrative is the most important of these elements, followed by good art design, well-written characters, and puzzles that are challenging — requiring thought to solve without treading too far down a path of nonsensical “logic”. Just Ignore Them only manages to hit on one of those elements.

The story revolves around Mark who, since a young age, has been followed by horrifying monsters. His mother encourages him to just ignore them, but that becomes just a little bit harder to do when he finds his mother has been killed, presumably by those very creatures hunting him. The story then fast-forwards to Mark’s adult life, which is when the majority of the game takes place.

Although an interesting premise, it quickly becomes apparent that the story being told here is not as intriguing as it appears. Talking around spoilers, the reveal of what the monsters are, as well as Mark’s motives, are unnecessarily complicated. The game isn’t long enough to house these complex ideas effectively, nor are the ideas presented worth expounding upon. To be frank, the game’s narrative is sub-par at best, which makes suffering through a poorly-written point-and-click adventure game the most effective use of horror Just Ignore Them delivers.

From learning what the monsters are and the end reveal, to the character dialogue and general storytelling, none of it works, especially when a single run will only take you around two hours to complete. You just aren’t given any time to gain any attachment to the characters, let alone care about what they are going through. At best it comes across as a comical mess. The multiple endings aren’t enough to pad out this experience or build a deeper connection with these characters, either.

Being a point-and-click adventure game, solving puzzles is the majority of what you will be doing. Most of the puzzles are solved by finding an item, using the item on the environment, or combining items before using it to achieve what you need to. You do this by moving a cursor around the screen with the left stick, interacting with objects in the environment with the A button, and can access your inventory by moving the cursor to the top of the screen.

The controls work well enough, though moving your character must be done by selecting the floor where you want them to go, which feels more awkward than it should. The puzzles are simple for the most part, but some require some ridiculous leaps in logic to solve. This allows for some unnecessary frustration, but if you have played point-and-click titles in the past, then you are likely accustomed to the annoying leaps in logic required on occasion.

What Just Ignore Them does get right are the art and sound design. The overall atmosphere created here is effective at creating an eerie vibe, ratcheting up the intrigue in what you are about to get into with this game. Although the story ruins that vibe, the game continues to have a strong visual presence throughout. Pixel art may be overdone at this stage, especially with indie games, but this game proves that when done well, the style can still be effective.

The game runs well on the Switch, with no problems encountered through multiple playthroughs. It’s just unfortunate that the game overall has too many issues to make this a title worth recommending.

A point-and-click adventure game that does little to warrant its existence. Although it has an intriguing visual style, the comically bad story, lacklustre puzzles and extremely short run-time make it a hard game to enjoy.