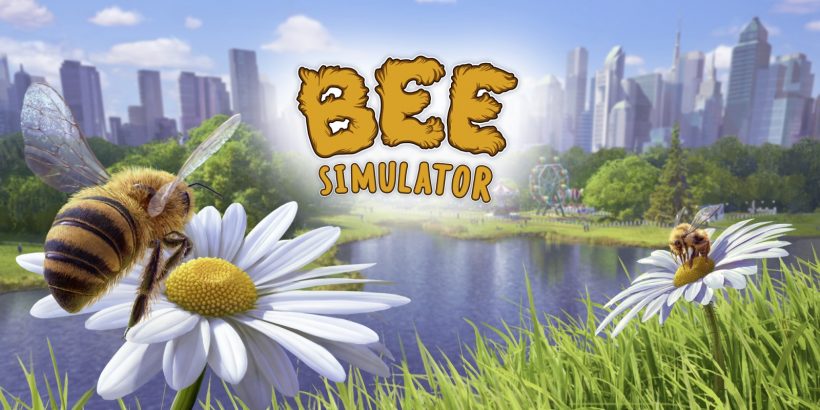 Simulation games hold the promise of a very special brand of escapism; one that allows you to inhabit another life, industry or creature so completely that the world outside slips away and only the game remains. Given the title’s name, one would imagine that Bee Simulator offers such an experience but, though enjoyable, the game plays much more like an interactive educational tale rather than a traditional simulator.

You begin the game as a newly hatched bee who, after a brief tutorial, is thrust into the everyday workings of the hive. The next few hours are spent exploring a vast park while collecting pollen, racing other insects, fighting hornets, and perfecting your waggle dance in order to progress a clearly defined narrative and collect knowledge points.

Sadly, these tasks sound more interesting than they actually are. For example, pollen is collected by flying through rings near flowers and the waggle dance is more of a basic memory test that lasts for just a few moments. Because of this, the game quickly begins to feel repetitive and the urge to break free and simply be a bee grows.

Playing on hard mode can stifle this urge for a more meaningful gameplay addition by adding timers to set events, as well as transforming fights from a quick-time event into something that requires more mental engagement. Bee Simulator also offers four-player co-op by means of an additional mode that unlocks new maps and allows you to explore new environments alongside your friends. Again, however, the gameplay starts to feel a little stale after brief moments and the novelty factor soon wears thin.

That said, there is still much to admire about Bee Simulator. From the beautifully-illustrated cutscenes and expansive environment to the enthusiastic voice acting and earnest storyline, it’s clear that so much love has been poured into this title, with most complaints stemming from the general gameplay design rather than a lack of effort overall. What’s more, once the story is complete and free flight mode is enabled, roaming the park, gathering pollen using your specialist bee vision and completing side quests for knowledge points is enjoyable. The only issue is how long the game takes to get to this point.

So what exactly is the end goal here? Given that the experience is shallow (though charming), “true” simulation doesn’t appear to be the objective. Instead, the concept of “collection” seems to be the focus. For instance, as you explore the park, animals and plants are logged in your journal and bee facts can be discovered. And remember all those lovely knowledge points you’ve been diligently hoarding? These can be traded for new bee skins, trails and hats (yes, hats). So could this be enough to encourage players to return time and time again? Unlikely.

While these are wonderful and surprising additions, the current wardrobe is limited in scope and the trails appear to be bugged, manifesting as mere particle effect splutters during flight rather than the full deal. Although wearing a tiny cowboy hat whilst popping balloons with your stinger is a welcome distraction, you quickly find yourself wondering where the end game lies.

As with all things in life, setting clear expectations is important. And interestingly, were this game called “Bee Story” or “A Bee’s Tale“, the experience would likely be more enjoyable. But sadly, despite the obvious passion behind Bee Simulator, the title falls short in terms of expectations and does little to justify its £34.99 price tag.

Bee Simulator is a charming game, but one that never fully realises its potential as a true simulator. While at times gameplay was enjoyable, the overall experience felt limited and the experience was more akin to an interactive educational tale.