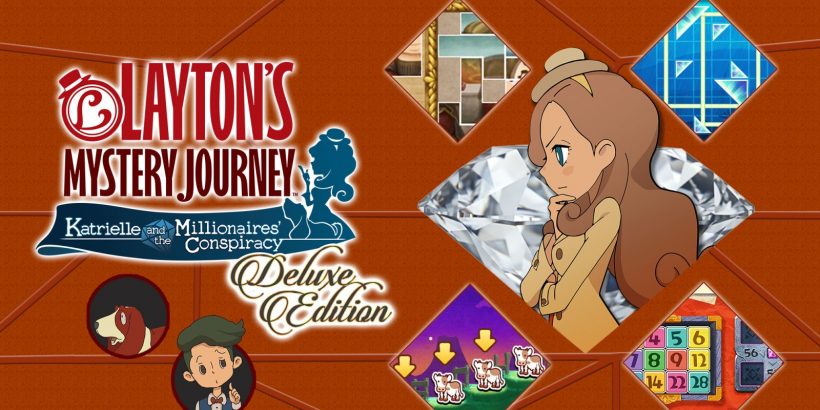 Before the advent of our favourite hybrid device, Nintendo had its own domain on the handheld market. The 3DS, by itself, had a whole realm of exclusive games available – a plethora of titles specifically tailored as an on-the-go experience. Now that the 3DS is finally winding down, it’s not surprising to see some of these most remarkable franchises ‘Switching’ it up.

The last title on the Professor Layton series is one of the latest games to follow suit. Instead of featuring the charismatic detective, though, it’s time to investigate as his daughter Katrielle, as she follows her father’s footsteps in Layton’s Mystery Journey: Katrielle and the Millionaire’s Conspiracy – Deluxe Edition.

If you’ve played a Professor Layton game before, playing Layton’s Mystery Journey will feel like wearing an old comfy sock. Even with the new protagonist, the structure of the game remains pretty much the same. As ever, the whole narrative takes place as a visual novel, with Katrielle’s investigations unfolding as a result of extensive dialogues with many different and unique characters. Scattered across various scenarios, dialogues, and even menus, lie an astonishing number of bite-sized puzzles. Despite not always having a direct connection with the game’s narrative, these puzzles compose the main gameplay element of the game – for better, and for worse. We’ll come to that in a bit.

In addition to the introduction of Katrielle and her two sidekicks (the devoted assistant Ernest Greeves and the talking dog Sherl) as new protagonists, Layton’s Mystery Journey takes a twist when it comes to its narrative structure. This time, instead of an overarching long, complex case, each chapter is composed of a self-contained investigation. Some characters are present during the whole adventure, but on the whole, everything is much more compartmentalized. While this may sound like a drawback compared to previous Layton titles, this structure actually helps with the passing of the game.

The so-remarkable Layton puzzles are the best of their kind in this instalment, coming in many different shapes and formats. Some aren’t much more than short word riddles, where you need to grasp the sense of a seemingly normal sentence; others follow a jigsaw format, or a math problem, or a perspective illusion. Variety is certainly the key word here. However, with this variety comes irregularity. Certain puzzles are more annoying than actually intriguing, but thankfully, they are all brief. After an answer that was more “really?” than “a-ha!”, you’re back to the narrative in a matter of seconds.

Layton’s Mystery Journey – as a unique mixture of visual novel and puzzler – is presented using visually-pleasing art direction, mixing 2D artwork with cell-shaded 3D models in a very interesting way. The character design is outstanding, and the game’s London is a continually interesting place to visit and explore. For those who want for a complete experience, Layton’s Mystery Journey also comes with tons of extras, including customisation items, collectables, side-stories, additional story-related puzzles, and even an expansive set of daily puzzles.

Despite its fresh protagonists and sophisticated direction, Layton’s Mystery Journey: Katrielle and the Millionaire’s Conspiracy – Deluxe Edition doesn’t necessarily reinvent the franchise. It follows a lot of the same conventions as the previous instalments in the series, and while just as rewarding when solving difficult puzzles, those that are more frustrating than satisfying can really put a dampener on your experience.

It’s a great option for those who love the series, or who want for a fine puzzler that works wonders in short-bursts, though.

The unique mixture of visual novel and puzzler found in Layton’s Mystery Journey: Katrielle and the Millionaire’s Conspiracy – Deluxe Edition is great to be played on short bursts. Tons of contents and charismatic characters are enough to make you ignore its annoying tidbits.