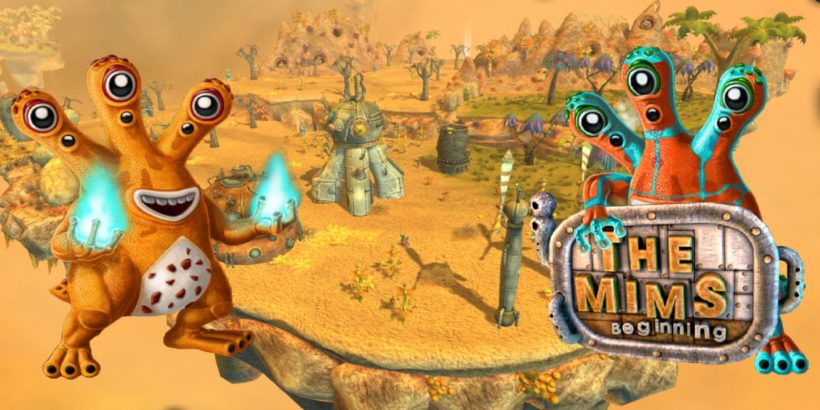 One cannot use the words ‘god-like’ and ‘strategy’ in a sentence without also using ‘black’ and ‘white’ too. Recreating all that was great about one of the most famous god-like sims is an unenviable task – cue The Mims Beginning. Developed by Squatting Penguins and published by Ultimate Games, The Mims Beginning is a god-like strategy simulator that attempts to bring a dose of humour and a sense of wonder to the Nintendo Switch.

After a short and uninspiring introduction to crash landings and new starts, The Mims Beginning tasks you with recreating a buzzing metropolis where the Mims can be self-sustaining. Everything from silos for recycle and reuse to wind turbines to generate electricity, there are a number of elements to get your head around. All of this is taught through a lengthy but straightforward tutorial where it models the how, the where and the why of each decision made. Whilst the text is on the small side, especially in handheld, it does do a great job of introducing you to the world of Mims.

As you delve deeper into this management sim, all manner of options become available to you. Create a Bio Lab and you can produce new species of animal which can be sold to the galaxy’s highest bidder at a a later date. Produce a PSI tower and send pods out into the galaxy to recover lost Mims. Build a home and allow your Mims to relax and recover before setting out to build again. Use Psionic Explosion to defeat intruders to your camp.

Each of these systems has additional layers to keep them engaging. For example, animals cannot be sold until they are fully grown, they eat specific fruit based on their species, and they possess a number of abilities including soles, endurance and breeding difficulties. It sounds complex but in practice, these effectively run themselves and rarely are you consciously aware of the progression taking place.

Bio fuel and crystals are the two currencies in Mims and the key to both surviving and flourishing is dependent on how much you acquire. These are indicated in the middle of the HUD, along with many other notifiers, including the Smell’o’Meter (how attractive your camp is to predators and pests) and the number of Mims inhabiting your camp. It’s all functional without ever proving to be anything more than ‘earn this’, ‘spend that’ and ‘watch that meter’.

Visually, The Mims Beginning isn’t going to win any awards and, whilst that’s not game defining, it is easy to see how would-be suitors of this god-like management sim would be put off. Unfortunately, with good reason. The graphics and performance are indicative of The Mims Beginning as a whole: it does a job but it’s far from awe-inspiring or genre-defining.

For better or worse, The Mims Beginning is exactly what is advertised: a budget god-like strategy sim that needed more time, more money and more thought to reach the upper echelons of games before it.

If one is willing to take the time to learn all about the Mims and the backstory, whilst also understanding the many systems in place to secure survival, there is a game here that could sap hours of your time. For some, the simplistic rinse and repeat gameplay could, and should, grow tiresome quickly. It most likely will too, as there is no save function between levels which is an unforgivable oversight.

God-like in intent but not in delivery, The Mims Beginning is not a game to spend your hard-earned time and money on. It does have some redeeming qualities, but not enough to overlook its shortcomings, of which there are many.