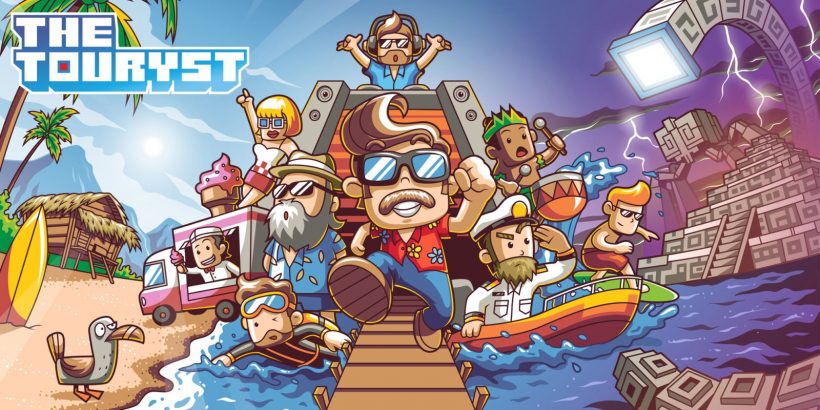 The Switch can provide us with some sweet getaways from the comfort of our own living room – the Seaside Kingdom from Mario Odyssey or even the haunted mansion in Luigi’s latest adventure, anyone? The Touryst, from renowned developer Shin’en, gifts us with a voxel action-adventure puzzle game that looks stunning and seeps with so much charm and charisma from start to finish making it a title that’s difficult to put down. It’s a new getaway well worth your time, too.

With next-to-no background story or narration, you immediately take control of a boxy, moustachioed tourist that has a hunger for adventure. The mute protagonist doesn’t have any flashy abilities, weapons, or anything else that you’d expect from the main character. Instead, it’s up to the player to solve light puzzles, uncover secrets and work their way through holiday destinations such as the rain-drenched Soggy Island, the hip and funky Ybiza and the welcoming Touryst Island.

Upon meeting with an old man in a mysterious ‘monument’ (basically a cave which acts as the hub), you’re tasked with obtaining four power cores that are obtainable by solving the puzzles within each of the four different areas. It’s this simplistic approach to essentially one big elaborate fetch quest that helps to make playing The Touryst an absolute joy. You’re free – after a certain point – to explore the islands at your own leisure. Gathering coins from completing side quests and helping out the residents all helps to obtain the power cores and, although it’s not particularly taxing to piece together the clues given to you, the sense of achievement is heartwarming.

It’s the simplicity of using a newly obtained double-jump skill to grab a ledge in an earlier part of the game or finally getting the right clothes to wear to gain access to a Jazz Club that makes the whole thing highly satisfying. You’re never left wondering what to do or where to go as backtracking across each location is quick and simple. Your handy ‘to-do’ list from the pause menu ensures that you don’t get bored, either. It’s not imperative you do all the side quests, but the end game is made easier if you do complete the majority of them.

Where The Touryst lacks in different play modes, it more than makes up for it in its striking style, slick 60FPS performance and an incredible soundtrack. The deep synths and moody chord progression could have been taken out of Stranger Things and I found myself taking longer than I needed to just because of the music. I just wish there was more of it.

While the controls are easy to get to grips with, it’s a shame the puzzles are, for the most part, on the same wavelength. Sure, some had me scratching my head, but never did they really challenge me. That’s not to say they’re bad, not at all; some of the challenges in the monuments were ingenious and utilised some surprising elements in the game.

The 6-or-so hour journey is over far too quickly. Just before it was really kicking off, I found myself reading the credit screen and begging for more. Saying that, the time spent exploring and uncovering the secrets hidden within made a huge and lasting impression and I implore anyone who’s looking for a surprisingly deep adventure to purchase this game.

Shin’en has once again provided a tight and well-polished experience that looks the part, too. The Touryst would be a masterpiece if it wasn’t for the shortness, but the time you do spend with it is memorable and great fun.