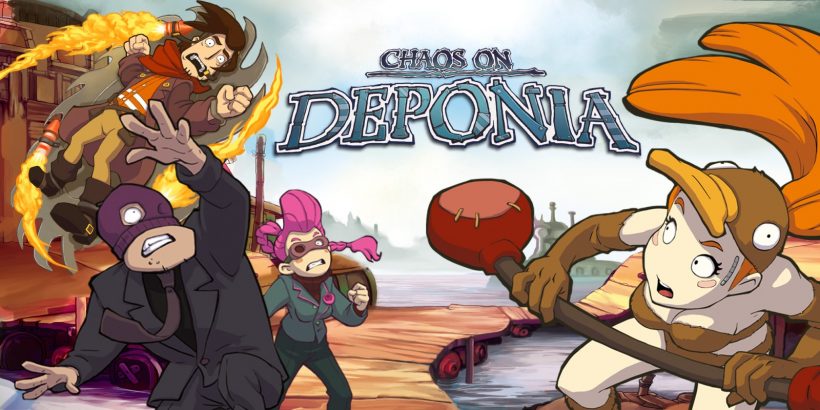 Chaos on Deponia is the second in a series of games that have been released throughout the last decade. As these titles make their way to the Nintendo Switch, they bring with them a highly regarded set of point-and-click adventures that take inspiration from the works of Douglas Adams, Terry Pratchett, and Matt Groening. In this sci-fi rescue adventure, you will embark on another tale of humour filled with quirky characters that bring forth all the charm in the world. However, as is a constant complaint with point-and-click adventures of this style, you still have the nonsensical puzzles that continue the tradition of connecting light bulbs with toasters to create a new ignition switch for a spaceship, because that’s how things work.

Set on the garbage planet to the high-life residents of Elysium, Deponia is where the downtrodden and ne’er-do-well folks reside. Epitomizing that lifestyle is Rufus, a young man from Kuvaq who fancies himself an inventor and tinkerer who wants nothing more than to get to Elysium, the spaceship utopia resting above Deponia. As he makes another attempt get there, in high-flying saw blade fashion, he runs into an old friend from the original instalment, Goal. After her consciousness is accidentally split into three parts, it is up to Rufus to again save Goal, venture to Elysium, and protect the people of Deponia.

For series veterans, this will be another enjoyable adventure if the first was one that tickled your fancy. Newcomers will be happy to know that Chaos on Deponia is a stand-alone adventure, and thus playing the previous game isn’t necessary for a playthrough here, but some references will be lost as should be expected. The Deponia series is great at poking fun at its protagonist and including humourous interactions in non-stop fashion, which lends itself to the illogical gathering of random items that somehow magically manifest into whatever it is you need. If you are looking for a more edgy title or one that makes sense, then this one will most certainly not be for you.

Unfortunately, a majority of your time will be spent back-tracking and clicking violently about searching for the answer to each question for progression. For some reason, it became fashionable for the puzzle completion in point-and-click adventures to include unusual combinations that no normal person would be able to think up. Because of this, a lot of the gameplay will consist of searching through your inventory trying to combine items, clicking those items onto the environment, and the like until something finally happens. This isn’t the case at all times, but it is enough that I can’t remember those successful attempts, making the gameplay loop something that is just a wall that must be climbed over in order to return to the endearing story.

What sets Chaos on Deponia – and the others in the series – apart from other point-and-click titles is the fact that they have crafted a world that is interesting, a story that lures you in, and a protagonist that is equally sketchy and loveable. If you haven’t been a fan of this genre in the past, however, this won’t be the one to change your mind, as the mind-numbing environment search and ludicrous puzzles match with the status quo to a fault. This series as a whole comes highly recommended to anyone who likes point-and-clicks and hasn’t given this one a try, otherwise you can probably move on.

Chaos on Deponia is a modern classic in the point-and-click adventure genre, but still fails to solve the issue of nonsensical puzzle-solving, even if the characters, setting, and story are endearing and charming from top to bottom.