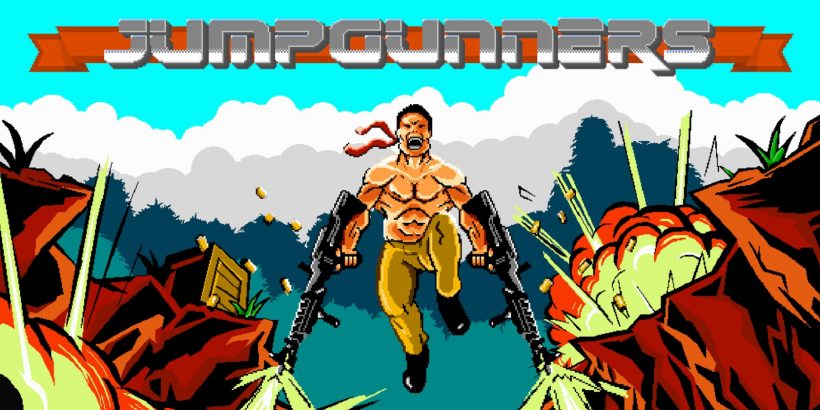 Despite the way the Switch was designed, there really aren’t all that many games made with four friends sitting around the TV duking it out in mind.

The premise of Jump Gunners, as should be the case for games that you want to jump into and let loose with as quickly as possible, is very simple indeed. It’s simply about gunning down each of the three other players on the field, with just the one hit required to get the job done. The action is presented from a side-on view with pixellated graphics, making for a retro style feel, but it’s the side-on viewpoint which means that aiming can be done in 360 degrees around the player by swivelling the right stick.

The controls will take seconds to pick up: the jumping part is done with ZL, and the gunning with ZR. The R button can be used to launch grenades when you find them, often in crates around the battlefield, and once you have that trio of buttons memorised you’re ready to go. The tactical element in the gameplay comes when firing your weapon makes you shift backwards due to recoil, and not being careful can mean this will have players careening off the battlefield. In the game’s main battle mode, there are no lives – it’s one-shot kills everyone, so the slightest of mistakes may well be enough to take a player out of the match.

That classic last man standing mode is played until one player has scored five wins – though each round will take place on a new stage, the options for which are pleasingly varied. Some will have all players level on a flat surface, meaning from the word ‘go’ you can eliminate all of the opposition players, while others will have everyone on completely different platforms, so competitors will have to traverse to higher or lower ground in order to catch a clear line of sight to the other players. Moving around the stage is where the best participants will excel – you can use a double jump to reach less intimidating platforms, but otherwise you’ll have to jump towards walls and wall-jump your way up them. Sometimes this isn’t possible due to the shape of the wall, at which point you’ll have to use the recoil of your weapon to shoot downwards and fire yourself up in the air, leaving yourself open to a sharp marksman up above if you aren’t careful enough.

Jump Gunners is a sharp, quick and cleverly designed multiplayer experience set over short bursts of time. But there are also single-player options: one asks players to take out targets across a stage in the shortest amount of time, and two different endless modes which are all about setting high scores, as you’d expect. You can even play a range of modes with your friends, from Team Deathmatch to Capture the Flag. All things told, then, you’re probably getting the right amount of content for your £8.99.

Perhaps the biggest criticism to be levelled at Jump Gunners is that it lacks any real personality. There’s little to no reason why you’d come back a few months after first playing it, and that’s a drawback of these pixel-style games. But, this is a comparatively diverse offering when put up against similar titles on the eShop, and if you’re hosting a party that people of a gaming persuasion will attend any time soon, this might be a good shot.

Jump Gunners is a good title for short bursts with friends in a party situation, but there’s little reason to revisit the game months down the line. It suffers from a lack of personality in its visuals, but at least there’s a good range of things to do.