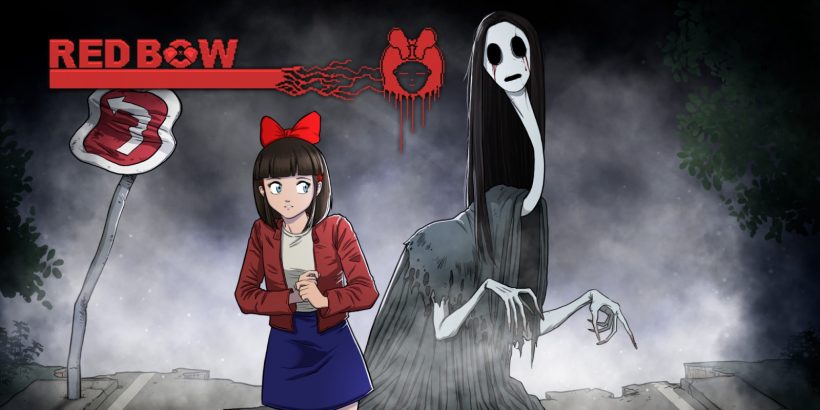 The similarities between Ratalaika Games’ latest release and Snow White start and end with that red bow. This game is no fairy tale. Irrespective of the charming visuals and quirky soundtrack, Red Bow is a dark and daring gameplay experience that comes with a stark warning on the eShop: “This game depicts scenes of death and suicide and is not recommended for a younger audience or those who are sensitive of the topic.”

Introduced from a top-down perspective, you meet the protagonist, Roh. She is a young girl who is trapped in a bizarre recurring nightmare filled will all manner of disturbing thoughts, feelings, and monsters. The aim is to interact with both the environments and the characters to uncover the secrets and storylines which plague the NPCs within.

Whilst the visuals suggest inspiration has been found in the likes of Reverie and Golf Story, it’s the mystery and horror of Red Bow which feels much more inspired here. It’s hard not to think you are on the set of Silent Hill when you leave Roh’s house for the first time. The moments of puzzle-solving are also relatable to games such as Resident Evil, yet much like everything with Red Bow, the experience is a much shallower affair. Ultimately, this is the downfall of this otherwise promising adventure game.

Red Bow has been tailor-made to encourage multiple playthroughs which is great for replayability, but the manner with which it is achieved is where disappointment sets in. There are a number of occasions where you are seemingly on the right track, only for the game to determine that your water-tight plan was not what they had intended for you, and the game restarts. There is little explanation and you are subsequently expected to start from Roh’s house once again. There are only so many times that one will be willing to do this before monotony sets in, thus making for a short and shallow experience.

When you do successfully solve the puzzles of the scene, there is a creativity to how the different elements come together which is enjoyable to experience. It is easy to overlook an item or fail to identify its use, and when you inevitably receive the ‘Game Over’ screen, it forces you to reflect on what items you had on hand at the time and how they could have been used differently. This is a sign of a competent puzzle game and provides the reflection that so many puzzle game fans enjoy. That being said, it would have been better if these items had multiple uses, or if you were able to test the items out, regardless of whether or not they would work. It is because of this lack of freedom that the feeling of linearity is present.

There are many occasions throughout Red Bow where design choices feel at odds with the atmosphere being created. The aforementioned visuals do little to support the dark and foreboding vibe that the story aims to produce, and the advertised multiple playthroughs are only a result of linear puzzle-solving. Even the dialogue is so linear that retracing steps after an event still yields the same response, regardless of whether you have advanced the story or not. This is a shame as Red Bow has a lot of untapped potential that, had all of the components been better developed, could have made for an excellent role-playing puzzler.

Red Bow will lure gamers in with its pixel-art visuals and promise of a top-down, creepy adventure. Whilst it may impress for a short while, it will ultimately leave them wishing the game had been much more than it is.