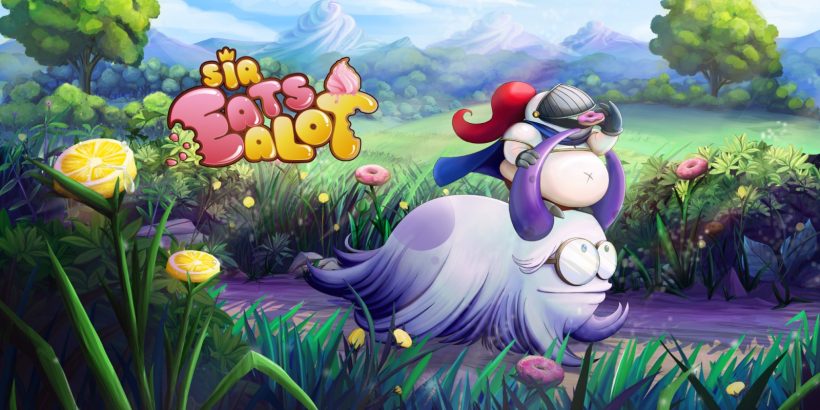 We really do love the idea of a world where almost everything is made of food.

Homer Simpson got to live that dream in The Simpsons Movie, and Switch Players can now do the same with the release of the eShop title Sir Eatsalot. Don’t expect to be playing this one on the TV, though – this is a rare example of a handheld-only title on the Switch, with Tabletop Mode ruled out as well. The reason for this is that this is a 2D platforming adventure which makes generous use of the touch screen.

It’s the touch-screen aspect which is the sensible place to start then, as the control scheme is the aspect of Sir Eatsalot which sets it apart from the many other platformers on the Switch eShop. But it wasn’t an aspect which left a positive impression. The touch screen is used for two primary functions – the first is to touch plants to drop food which can be eaten to replenish Sir Eatsalot’s health or his energy meter. The other is to interact with elements of the environment, including bear traps, in order to set them off before they can catch Eatsalot as he bundles towards them.

The problem is that this isn’t as natural to perform as it ought to be. Movement is handled with the left Joy-Con, and jumping with the right, so when you’re on the move and negotiating a series of jumps, your hands will be otherwise engaged with trying to land the jump and to get the momentum necessary to make the jumps. It was also incredibly difficult to press the traps to set them off when Eatsalot was mid-jump, leading to increasing suspicions that this was actually physically impossible. It’s pretty unintuitive stuff.

Also, the standard platforming gameplay itself is pretty clunky. This was a game originally designed for the PS Vita, but things do seem pretty basic, with the only button inputs being for walking, running and jumping. Set-pieces where Eatsalot is being chased are irritating, as you’ll need to be running, timing jumps and picking up food to boost your energy while on the move. It’s not stupidly irritating, but it doesn’t flow as well as it should.

However, the best aspect of Sir Eatsalot is its storytelling, and the sense of adventure. Despite having fewer than five different enemy types, in addition to a handful of bosses, Eatsalot meets some memorable NPCs along the way. Every time you advance to a new location in the story, a quick cutscene shows the evil Queen Hysterica berating one of her minions for not ensuring Eatsalot has been seen off. It’s all very cartoon, family friendly humour – the main plot of the game is to purify the Isotonic Waters which serve the kingdom after they have been poisoned with sour lemonade, after all – and the humour is often on the mark, which isn’t easy to pull off.

The ‘gripping’ puzzles promised in the game’s synopsis aren’t exactly the most memorable – you’ll probably spend your time after finishing the game having nightmares about the extended section in underground caverns with dim to zero lighting – but collecting each background animal you see in a sort of journal makes for a sweet collect-a-thon sidequest.

Sir Eatsalot brings what so few other platformers do in the form of some personality. That’s very welcome – if only this game’s touch screen controls had as much of a positive impact.

Sir Eatsalot is great on story and personality, but is undone by the pretty underwhelming platforming side of things. The touch-screen aspect, while unique, could be done away with to offer less irritation.