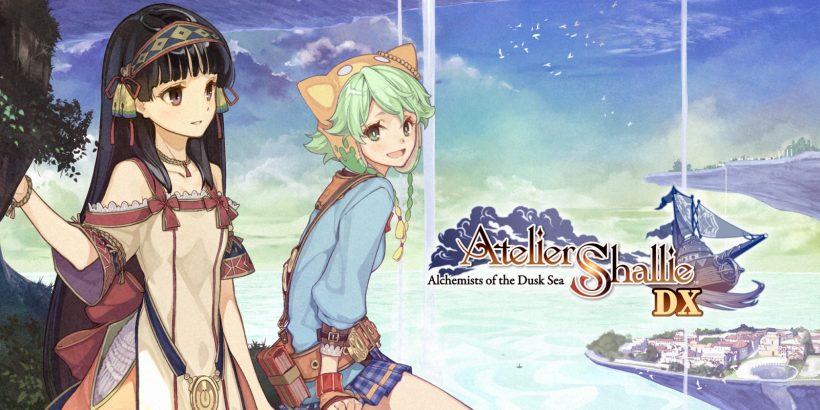 Finishing up the Dusk trilogy on the Nintendo Switch comes Atelier Shallie: Alchemists of the Dusk Sea DX.

Featuring the series staples of alchemy, open-world exploration, and combat, this will be a title that continues a lot of what series veterans will love. Not only is this the epic conclusion to this tale, but this entry offers fixes to a majority of my major issues throughout playing this series of titles. With that being said, this is still a JRPG that makes some questionable decisions in some places, meaning this is one that people who have played every Atelier game will put near the top of their list, but overall JRPG fans will still find some issues.

Again, following a pair of protagonists who this time around share a common nickname, Shallistera and Shallotte are both on a mission to solve the world’s water issue. The sea has dried up, creating a new home for all types of monsters, and before there isn’t any more usable water, this team of alchemists make it their journey to save the world again. Shallistera is the chieftain’s daughter in a small village that is currently hurting more than most in this crisis, and Shallotte is a low-wage worker from the city who is looking to help out while finding some fame and fortune. This drought is threatening everyone is this, again, shared world and another cast of characters is taking up the helm.

Alchemy continues to be a mainstay for this series and Atelier Shallie is no different. Luckily, things have continued to improve since Ayesha and we now have something I can safely say I enjoyed. Even though a deep-rooted crafting system based around the monotonous gathering of ingredients isn’t the best, the scattered tutorials, streamlined ingredients list, and upgraded way in which you can add bonus traits to items and weapons seriously improve every portion of this mechanic. This is by far the best iteration of how alchemy works but having better ways to obtain crafting parts would make it even better.

The best improvement in Atelier Shallie is the fact you no longer have to rush through the entire game. The time management mechanic has been eradicated and I couldn’t be happier about it. You can now safely take your time through each section of the game and see everything that you’d like to see before moving on in the story. However, there is still some things you must complete before you can move forward. “Life Tasks” prompt players to to complete fairly easy, random objectives like “defeat this monster…” or “gather this many of this ingredient…”. Although simple, they don’t add much to the game, even if it’s hard to complain after repealing the timer.

Atelier Shallie: Alchemists of the Dusk Sea DX shows just how much the developers took into account how the player-base felt during the original PlayStation 3 releases. Escha & Logy improved the formula, but Shallie brought it to a peak. As much as I can recommend this title if you’re looking for an Atelier game, it is still a pretty basic JRPG.

Atelier Shallie: Alchemists of the Dusk Sea DX culminates this trilogy into an experience I can finally recommend. If you’re looking for a good Atelier title, then look no further, but JRPG veterans will still probably find it too simple.