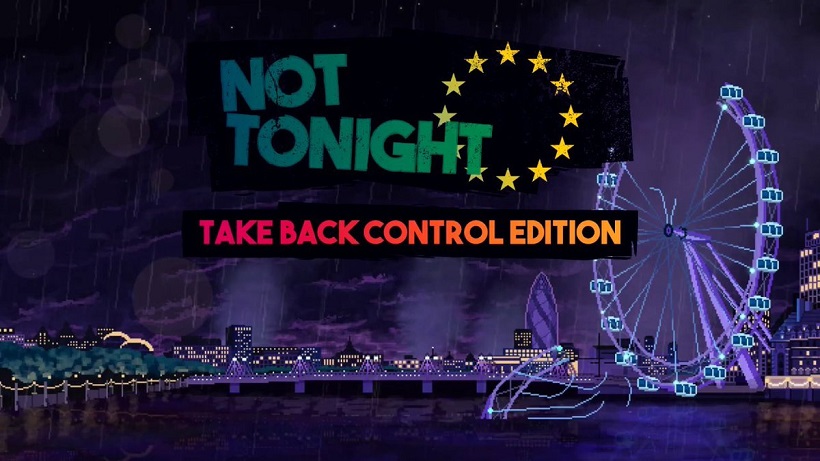 There are many on social media who decry every time a video game tries to be “political”.

The argument is, for some reason, that politics should not be present in the medium. Thankfully, Not Tonight sticks two fingers up to that absurd notion and clearly plants its position in the ground: ‘Brexit is bad’, this game tells us, ‘and this is how it could play out.’ Is its depiction of Brexit Britain exaggerated? Slightly, for sure, but it’s a satire of the dreams of many of those supporting the decision.

In this hyperbolic depiction, Britain has gained its “independence”, and with it has come the rise of Albion First, a party working with the Conservatives and that is poised to replace the latter as the Government of the country. In this world, you’d better hope you don’t have any ‘Euro Heritage’ within a couple of generations, as even if you were born here, they’ll still want to send you back to where you didn’t come from. No, they don’t care if you were born in Somerset.

If you’ve played the equally unsettling Papers Please, then the way in which Not Tonight plays will initially seem all too familiar to a fault for the first couple of hours. As European citizen #112, your newly designated job is to be a freelance bouncer accepting jobs via the BOUNCR app. You’ll mostly be accepting jobs for a range of different establishments across the South West, and occasionally more prestigious ones in the forlorn capital. At first, this will involve checking people’s ID cards to make sure that they are over 18 and that they aren’t using fakes. In practice, this is simply pressing ZL to take their ID and then A to let them in or B to deny entry. As time goes on, guest lists, tickets, and VIP passwords are introduced. But the cruelty of Albion First’s nationalist policies starts to kick in as you’re told to exclude French nationalities, soon followed by Irish and Italians as well.

As you manage to successfully remain in England by paying an extortionate fee to cover the temporary visa allowing you to stay in the country, additional costs are added to your helpful BILLR app. This goes beyond the standard rent and water bills, as there is also the Euro tax to deal with too! Unsurprisingly, your health soon starts to suffer, and you’ll need to keep an eye on it using the MEDR app. The NHS has been privatised and sold to the Americans, but even that travesty is out of reach for “Euros”, who must pay through the roof for a sub-standard service.

With what’s left over from the little money that you do make it becomes essential that you purchase – via the SHOPR app – upgrades for your leaky flat, such as a heater. Unfortunately, you’ll also find it necessary to take the occasional day off work, otherwise, you’ll quite literally work yourself to death, However, you can help the Resistance to bring about a positive change to this increasing dystopian nightmare.

Not Tonight provides a pessimistic vision of Britain’s future, all through a distinct pixel-based aesthetic. The cruelty of the in-game fascist government affects the way you play, as you gradually become complicit with the persecution you face. Checking people’s ID might not be everyone’s idea of a fun Friday night, and whilst it can alternate between either too simplistic or frustratingly picky, ultimately this does link well with the nightmare that is bureaucracy.

Not Tonight: Taking Back Control Edition £19.49

Not Tonight is the bouncer simulator you didn’t know you needed, but it’s also a biting commentary on Brexit Britain and the political and social shift that has been brought about as a result.