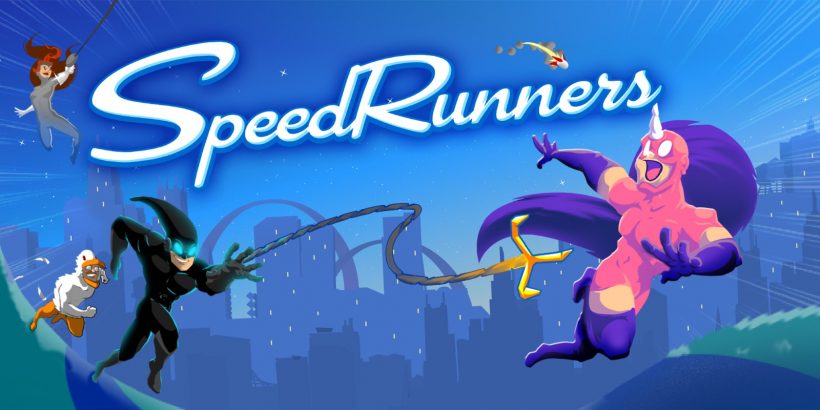 In a broader sense, you could separate most multiplayer-focused games into two big groups. At one side, there are the party-centric titles: family-friend experiences that are very easy to jump in and enjoy. They are fun, light-hearted, and welcoming to all ages. Then, at the other side of the coin, there are the hardcore competitive multiplayer games. They often have deep mechanics, ranked modes, and feel more like ‘serious businesses’. Some of the best multiplayer games, though, such as Mario Kart 8 Deluxe, are the ones who manage to mix both approaches in a cohesive way. Games that are easy to play, but has depth to master. Just like SpeedRunners.

The most incredible thing about SpeedRunners is how it builds such a fun multiplayer experience on top of a very simple concept. Playing or watching a single match is enough to make you understand what SpeedRunners is all about. Basically, it is a 2D side-scrolling platformer where up to 4 players compete in a kind of frantic race. The main catch is that the levels don’t feature a set number of laps, nor a defined main objective. Instead, each match takes form as an eliminatory game, where the last one standing wins.

How players are eliminated is one of the elements that make SpeedRunners so great. Basically, the camera is always following the player who is in first. If one of the players that are behind the lead gets out of the bonds of the camera, they are out. Then, the match continues until all but one player is knocked down. To make things more interesting, though, once one of the players is out, the screen starts to shrink, making it much harder for those who are behind to keep up.

With just this basic premise, SpeedRunners could already be an interesting multiplayer game. However, the game adds a couple of chaotic elements to the equation. In addition to jumping, you can also slide and grapple into certain elements from the locales. With that, you must try to evade the many obstacles scattered through each level. Small gaps, spikes, and lasers are just a few examples of the things you need to be careful of. To make things even worse (or better), in a very Mario Kart fashion, players also have access to a series of power-ups, which can be used to attack other players.

As much as the premise and mechanics of SpeedRunners turn it into an amazing multiplayer experience, the same can’t be said about its single-player content. Its short campaign works more like training sections for its multiplayer, because it features the same levels and mechanics, but with bots – which isn’t nearly as fun as playing with friends. It also chooses to tell its narrative in a weird way, with comics that can be read. Not so fun, not so interesting.

SpeedRunners also deals with a specific issue to the Nintendo Switch. Due to the unique way the game uses the camera as an important mechanic, at times, it shows the entire scenario in a zoomed out way. Consequently, when in handheld mode, characters and elements become nothing more than tiny sprites in the middle of a gigantic map. This makes it a burden to play on the go, and I imagine it would be even worse on the Switch Lite. Nevertheless, if you’re fine with playing only on the big screen, SpeedRunners provide a superb experience to be shared with your best ones.

While not perfectly suited for the small screen, SpeedRunners provide a fantastic multiplayer experience that is easy to jump in, but hard to master. If you’re a solo player, it may not keep you hooked for long, but grab some friends, and you’ll have fun like never before.