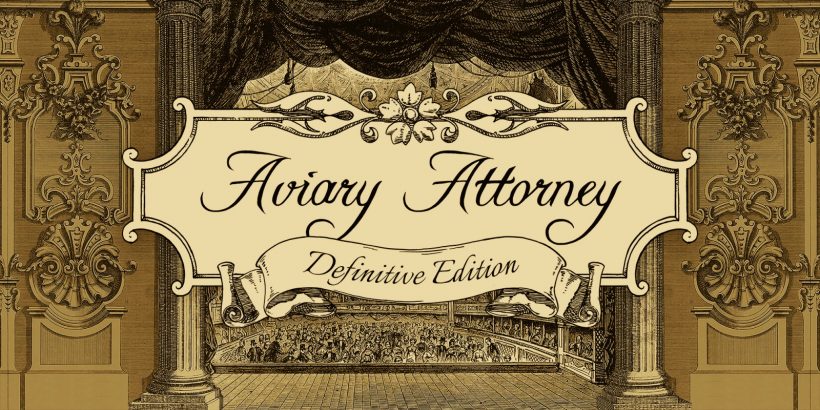 Bonjour, mes amis! For all you classy fowl about, I have discovered a most trendy title from Sketchy Logic and Vertical Reach called Aviary Attorney: Definitive Edition. This point-and-click, narrative-driven, puzzle-adventure with obvious inspirations from the Ace Attorney series graces our Nintendo Switch systems for the first time, after its original release on PC in 2015. Featuring art from 19th-century caricaturist J.J. Grandville and music from composer Camille Saint-Saëns, Aviary Attorney will woo you in with pleasantries, eventually resulting in an experience that looks, plays, and feels delightful. Even with a rather short playtime and difficulty that won’t set you back, this is something fans of Phoenix Wright’s formula will find charming and quaint.

JayJay Falcon and his trusty partner Sparrowson are defence attorneys for hire in 1840s Paris. During this tumultuous period of history, there is a clearly defined line between the classes, with rebellion and revolt on the tip of the tongues of many of the common people. As you defend accused murderers and lawbreakers, you will meet some influential people throughout the city, with which you will have to make some decisions to radically change the future for Parisians. Concluding in three separate finales, you will be able to replay portions of this game to get the various endings, but beyond that, a full playthrough only runs you a couple of hours. Since the package presented is so well done, it was a shame that things wrapped up so quickly, but all great things must come to an end.

Clever and filled with all the bird puns, dialogue in this title is well-done and enjoyable. I was a bit surprised to see some call-backs to present-day terms, like tweeting and Facebook, but these immersion-breaking references are few and far between. The mix of French verbiage and references along with the historical easter eggs were masterfully done.

Visiting the locales available to you for each case lets you search around for items in the environment that could be crucial to your victory. Luckily, this portion isn’t drudged down with a ton of random, unusable things to click on, but there is a bit of fun dialogue littered throughout here. The pencilled artwork, at times, makes for a tough nut to crack when in the hunt, but a quick searching around with your cursor doesn’t slow you down too much.

The puzzles are found in the trials, as made customary in Phoenix Wright: Ace Attorney, where you have to utilise your collected clues to conclude the testimony of some unruly avian. Choosing the correct item to match up with the incorrect statement from the podium is paramount to keeping the jury on your side, but even on the occasion when I made a few wrong choices it didn’t take the trial to any sort of failure state. This seems to be a recurring theme throughout, which wasn’t a negative to me, but those looking for a difficult experience will surely be disappointed.

Aviary Attorney: Definitive Edition is a triumphant take on the Ace Attorney series, that uses that tried-and-true formula and makes something interesting and unique. The art and soundtrack are incredible, and even with some lacking difficulty and a short playtime, there is way more here to like than you will be able to find an injustice. Recommended for any fans of the visual novel, point-and-click, or detective genres, it’s definitely one to add to your collection!

Aviary Attorney: Definitive Edition is an incredible take on the detective-style adventure genre. Top-notch artwork, great dialogue, and an enjoyable time that can be finished in an afternoon overtake most of the downsides across the board.