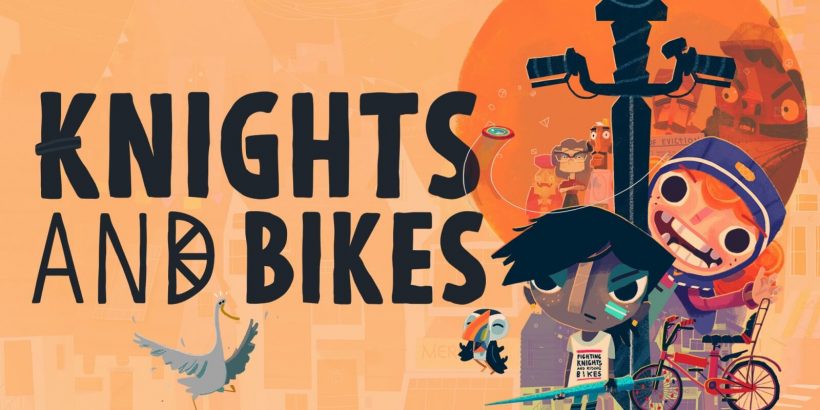 Despite having already launched on other platforms, it wouldn’t be too controversial to say that Knights and Bikes feels like it was made for Switch. Yes, much of this is due to how the game’s child-like sense of whimsy is perfectly in-keeping with the family-friendly eco-system Nintendo has built, but it’s also because the act of sliding off a couple Joy-Con and playing through this imaginative story with another is both seamless and liberating. If, like me, you’ve held out for this version precisely for this reason, you can rest easy knowing that the wait has been worth it.

But what is Knights and Bikes, for those unaware? Well, simply put, it’s a co-operative action-adventure from the same people behind Tearaway, telling the story of two young girls that grow to become best friends against the backdrop of a papercraft coastal town. Those that have played Media Molecule’s Vita classic will have some idea of what to expect – you explore many artistic locations, clonking baddies and solving puzzles – but whereas that game was all about putting your own mark on the world, Knights and Bikes is noticeably more authored.

The fictional island of Penfurzy is highly powered by the nostalgia of British campervan holidays, which for protagonists Nessa and Demelza is a playground of fun and wonder – the perfect place to hunt down treasure and chase away imaginary ghosts. Separate the paper from the glue just a little, however, and what you’ll find is a place suffering from the economic downturn of Thatcher’s Britain. Knights and Bikes beautifully balances the emotional alongside its vibrant surface story in this way, very much setting itself within the real historical context of 1980s Britain as perceived through the eyes of youngsters.

All of Penfurzy is yours to explore, either with a friend in co-op or by switching between the two with just a simple tap of a shoulder button. Nessa and Demelza play largely the same, for the most part, aside from a few specific abilities that let you overcome environmental obstacles together. One section, for instance, sees the girls venture into a run-down amusement park in search of a missing Librarian. Soon enshrouded in fire, the only way for the girls to get by is for Nessa to launch a water balloon, followed-up by a splash courtesy of Demelza’s big welly boots. Puzzles in Knights and Bikes rarely ever get deeper than this, but you don’t mind when the solutions are just so inventive.

In a stark change of tact to most action-adventure games, one of the aspects that’s most impressive about Knights and Bikes is its ability to keep on introducing new scenarios for Nessa and Demelza to contend with while staying interesting, despite them never really pushing back on you. Combat, exploration, puzzle-solving… all these elements lack any real challenge. This would normally be a problem in other games of this ilk, yet it works here due to the sharp writing, expressive hand-crafted art style, and Goonies-esque plot. Me and my partner didn’t die once in our eight-hour playthrough, not that we noticed, since we were just so absorbed in the fanciful events happening around us.

Knights and Bikes is a special type of game that doesn’t come around all too often, exuding enough charm and love that you can’t help but appreciate its artistry. What’s more, the Nintendo Switch version looks and plays flawlessly – especially with a friend by your side.

Knights and Bikes is a homage to all things homemade, British, and school holiday-related. The relationship between its two central characters makes for an endearing story, one with plenty of heart and historical depth.