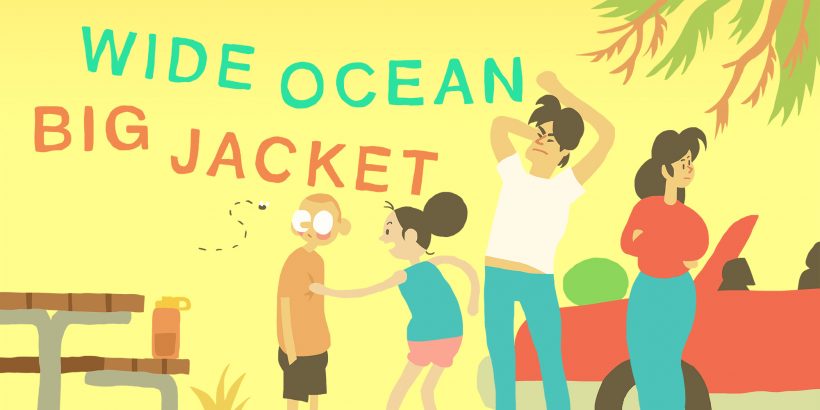 When it comes to cosiness, the Nintendo Switch would have to be the frontrunner among the current-gen consoles. There’s nothing like curling up on the couch, putting on headphones, and immersing yourself in a story that you can hold in your hands; the system’s portability provides a degree of intimacy that you just can’t get playing docked, and this makes the console ideal for certain types of storytelling. With its charming cast and intimate slice-of-life narrative, Wide Ocean Big Jacket is such a title that’s perfectly suited to this style of play.

Forgoing what many consider ‘standard’ gameplay elements such as puzzles, combat, and the like, Wide Ocean Big Jacket is a pared-back experience explicitly designed around the narrative. Told predominantly via a series of dialogue interactions interspersed with mild exploration, the story explores the relationships between its four main characters during a weekend camping trip. Affable middle-schoolers Mord and Ben are navigating the complexities of a new relationship amid the trials of adolescence, while Mord’s aunt and uncle contend with their own challenges, joys, love, and older wounds.

The strength of Wide Ocean Big Jacket lies in its deceptive simplicity. Minimalistic lowpoly graphics, unfussy gameplay, and a light, carefree soundtrack allow the narrative to take centre stage, and it’s surprisingly complex for an experience that takes so little time to complete. From the characters’ smaller worries and joys to commentary on consent, troubled families, and societal expectations of women, this game covers substantial ground and packs an emotional punch.

Peppered with humour and heart-wrenching moments alike, the writing uses creative text formatting and comedic timing to establish each unique personality. Although there’s the odd punctuation error that appears to go beyond the intentional characterisation, this thankfully doesn’t get in the way of the narrative itself. It’s particularly poignant to witness the contrasts and parallels between the two couples’ relationships; although the adults have experience on their side, they don’t have all the answers, and the adolescents are insightful beyond their years. With the natural, dialogue-based storytelling, there’s also enough room for your own questions and interpretations to surface, which helps to make the narrative more engaging.

Although a single playthrough may be enough for some, Wide Ocean Big Jacket is short enough that it’s realistic to play through twice in only two or three hours. Not only does this give you the opportunity to revisit accidentally missed dialogue interactions, playing through a second time with the background knowledge gained from the first also gives you the context to reframe earlier conversations and events. In this respect, the writing is marvellous; the experience feels different both times you play thanks to the detail and foreshadowing present from the beginning. It’s also possible to revisit the game’s distinct chapters rather than playing through in linear fashion, which is a nice touch.

Wide Ocean Big Jacket is not a game that requires the most precise of movements, but nevertheless the game suffers slightly in its controls. Navigating its spaces can feel ungainly at times as a result of the lack of precision afforded to you, although thankfully the controls are very simple.

Controls aside, Wide Ocean Big Jacket is an experience that deserves your attention. It’s light on ‘traditional’ gameplay elements, but don’t let that stop you: the narrative structure, humour, and surprisingly complex themes make it delightful, moving, and – most importantly – a joy to play.

Wide Ocean Big Jacket is a short story in video game form. With relatable themes and a cast of flawed yet lovable characters, this slice-of-life experience is worth a look for any fan of narrative-driven adventures.