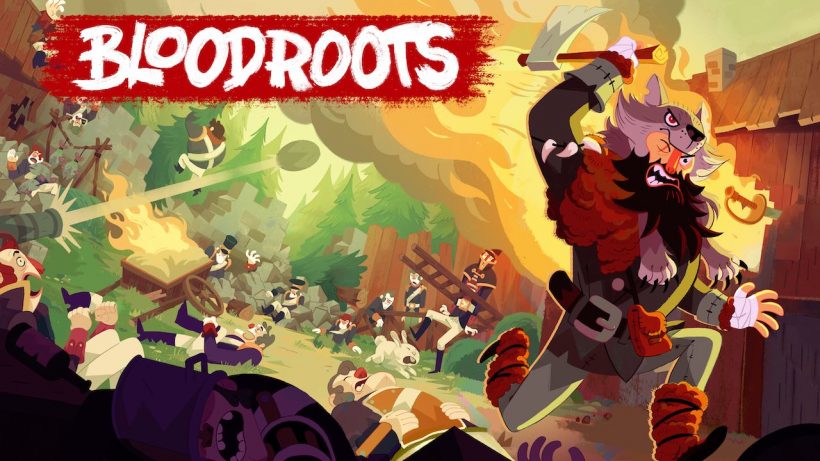 It’s nice to be surprised sometimes, especially when that excitement comes from something you previously thought impossible: Lightning striking twice. I say this because when Hotline Miami first released in 2012, I waited until a year later to enjoy its top-down kineticism and extreme bloody violence portably on the PS Vita. Dennaton Games’ neo-noir classic gave you a great sense of in-and-out gameplay, testing you to balance speed, skill and tenacity that worked remarkably on a handheld. I didn’t think that such an experience would be replicated on the go ever again. However, thanks to the beauty of Nintendo Switch, it has been in Bloodroots.

The first game from small-scale Canadian developer Paper Cult Games, Bloodroots weaves a simple tale. You play as a lowly woodsman making ends meet during The Wild West, until one day you’re betrayed and left for dead by a gang of outlaws. This swiftly leads you to undertake a quest for revenge via a gauntlet of mass destruction, letting you deal out death creatively using a wide variety of makeshift weapons that are sprawled out all around you. Each level is its own puzzle box of potential chaos, tasking you to clear out areas as quickly and inventively as possible.

It starts off relatively simply, with you getting to grips with humble axes, swords and vegetables (you read that correctly). Even then, however, these initial weapons handle wildly different from one another, with swords seeing you speedily dash forwards to potentially skewer multiple enemies, and axes offering a wide swing radius. The later into this three-act campaign you get, the more ingenious weapons become, but the catch is that all feature different levels of durability and will break after a certain number of kills. Bloodroots continually forces you to adapt and evolve your killing spree as a result.

Each level is made up of a series of areas that tie into an overall theme – one standout stage in the first act sees you destroy a mansion house, for example – and with all you’re highly encouraged to rinse and repeat with different kill strategies in order to work your way up the online leaderboards. Luckily, similar to, say, a Hotline Miami or Katana Zero, respawning after death is made instant and the checkpointing is extremely generous. There were very few instances where I found myself getting frustrated at Bloodroots; when I did it was due to my own failed strategy or slow reaction times.

So Bloodroots is one of the tightest, most addictive action indie games on Nintendo Switch, yes, but what seals the deal on it as a package is the mass amounts of flair. Whether it’s in how the colour palette of stages move naturally from deep reds and blacks to the familiar oranges and yellows of the Western Frontier or the Tarantino-esque kill animations you see after defeating the last enemy standing in an area, Bloodroots keeps you engaged in its story from beginning to end. It’d be enough for a game like this to deliver a satisfying gameplay loop, but presentation flourishes such as these are appreciated.

It should go without saying that if you were big into Hotline Miami or other briskly paced indie kill-a-thons, Bloodroots is sure to scratch that fiendish itch and then some. It’s a confident isometric actioner with enough colour and creativity that plays flawlessly on Nintendo Switch, sure to be the next mainstay on your dashboard.

Bloodroots is one of the most confident indie games to release on Nintendo Switch, sure to appease players with a fetish for violence, score-chasing and an enticing narrative. It’s the complete package.