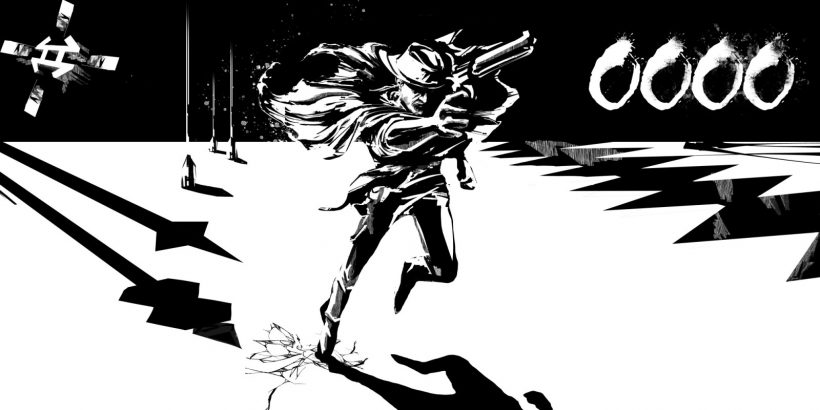 For a game that features a gun-toting rogue in its principal promo artwork, it’s surprising to discover that shooting is rarely required in Zero Zero Zero Zero. There’s not a lot to shoot, but don’t be fooled into thinking that Alvarop Games is offering a game that is free from danger. There’s plenty of ways to die amongst the one hundred black and white levels of Zero Zero Zero Zero.

Each level is composed of a single screen, and the first two are tutorials that teach you the basics: your tiny character can run, jump and shoot, with the task being to avoid the hazards to reach the gem on each level. After which escaping via the door that appears as soon as you’ve snatched the gem. After those first two levels, the remaining 98 are shuffled behind the scenes like cards in a deck, so that each time you complete a level (or die trying), you’ll be presented with a new randomly selected challenge. Those first two relatively easy training screens may give you a false sense of security because the levels that follow range from “pretty hard” and “very hard” to “is this humanly possible?” in difficulty.

There are spikes to jump over, homing missiles to evade, screen-wide lasers to weave between, and many more threats between you and your goal. There’s nothing else to collect: no power-ups or bonuses. These are tests of your navigational skills in the purest form. The Standard play mode offers unlimited lives and a timer, should you wish to try and complete all one hundred levels in one sitting (an ideal option for speedrunners). Hardcore mode limits you to just one life, and the task of seeing how many levels you can complete in succession before dying. It sounds insurmountable, but the fact that the screens are thrown at you randomly keeps things fresh and encourages you to try again. The eShop listing also mentions a Race mode (“Go head to head against a friend”), but at the time of writing this review I can’t find such an option within the game.

Accompanying you in this retro-inspired black and white world is a soundtrack of minimal beats, clicks, and glitches from UK video game composer Levi Bond. The striking monochrome imagery and the electronic ambient music co-exist well to create an environment that allows you to focus on the challenges at hand. Aesthetically, Zero Zero Zero Zero can be described as pretty perfect.

This is a challenging game with an 8-bit vibe, taking you back to the ZX Spectrum days when games weren’t so keen to hold your hand. There’s no particular gradient of difficulty curve here; it’s just a horizontal line labelled HARD. But upon being mercilessly zapped/spiked/flattened, you’re beamed back in so rapidly that it’s hard to resist trying again. The difficulty isn’t frustrating as such, because you can usually identify what you are meant to do to, and so failure boils down to your own reflexes rather than unfair game design.

If you are after a challenge, Zero Zero Zero Zero will provide it for you. It’s a game to rigorously test your hardcore spirit. The levels can be relentless, cruel, and devious but there’s always a solution. When you realise what is expected of you, a screen can potentially be completed in just a matter of seconds, but your pixel-perfect reflexes will be put to the test.

With patience and determination, Zero Zero Zero Zero can offer a challenge to test your game-playing abilities to the limits. It’s tough, but there’s satisfaction in success when the monochrome odds are against you.