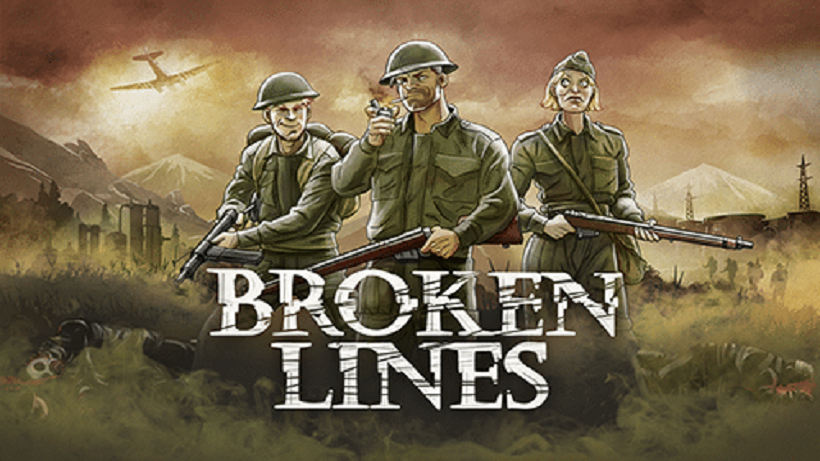 The wars of our past have been visited time and again in the form of games. Sometimes, developers take some artistic liberties to create new stories, or even alternate versions entirely. Broken Lines follows the story of a group of British troops who have been shot down over an unknown country, around the time period of WWII. This tactical strategy title has you fighting through battlefields in search of supplies and answers in one of the more unique versions of turn-based combat. Sporting multiple endings that allow for several playthroughs as you march in hopes of survival, you will find yourself making some tough calls while your party disagrees and even fights one another for those decisions.

As you collect your compatriots spread across this foreign land, you will be introduced to a unique cast that feels more human than the normal war-torn, brave troopers you may be used to. Some are scared, others are angry, and all have secrets behind their past and present that will be shown based on the decisions you make. These choices boil down to choosing between a few missions, depending on whether your goal is purely survival, or if you’d rather try to discover what is happening here. A seemingly deadly gas is seeping through the land, causing sickness, and some odd changes to civilians you will encounter. A militarized band may have something to do with it, as they lock up and quarantine people, but the truth behind it all will only be discovered if you choose to pursue it.

Each mission starts with a simple premise, for the most part, as you need to move from one end of an area to the opposite end while fighting through enemies waiting in your path. You will usually have multiple paths you can take to accomplish this and paired with the loadout of close-up or distance weaponry you equip your troops with, you can decide your style of play as well. Nothing here will surprise you until the gameplay starts. Each set of movements you choose for your crew, in XCOM fashion, will begin in eight-second chunks in full motion, giving this a semi-real-time feel, while allowing for slower planning. This means that you will have to try to consider what all could happen from the enemy movements to your own decisions, over the eight-second time frame, with bullets, grenades, and more all happening at the same time, rather than each individual unit moving independently. This made for one of the more unique experiences I have ever played in this genre, and the ability to play the entire mission from start to finish at the conclusion so you can see it all happen in real-time is a perfect cherry on top.

Beyond the mission structure and RPG equipment elements, you will have to manage your characters as they face the hardships of war. Sickness is affecting them all, as well as morale causing certain story segments to occur if things get too hairy. All of this makes for a more harrowing package from start to finish, as making sure you’re supplied is just as important as having that sweet bazooka.

Broken Lines offers a really well-made overall package for those who enjoy this genre, and the uniqueness in how movement works makes it more interesting than your run-of-the-mill XCOM clone. Highly recommended, even if the one shortfall comes in some subpar graphics for this port.

Broken Lines is a superbly unique take on the tactical strategy genre, with its multi-tiered story and turn-based combat that unfolds in real-time. A bit lacking graphically in the Switch port, but otherwise a great experience overall.