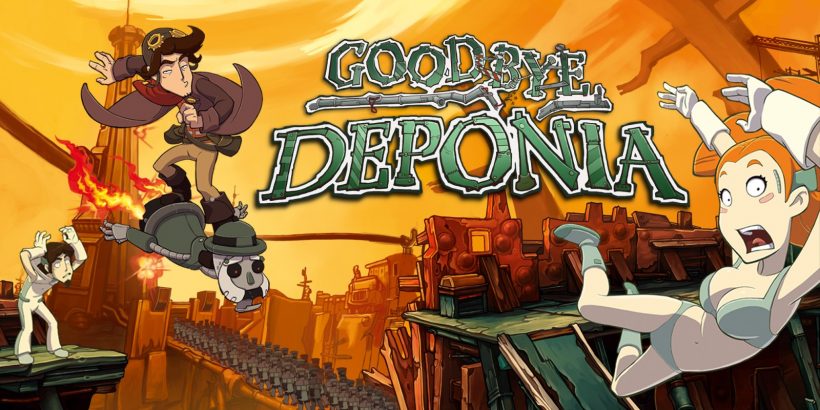 In a time of COVID-19 and all of the unpleasantness that comes with it, everyone wishes they could be whisked away to a fantastical game world, and the Deponia series is always useful for that.

Goodbye Deponia is the third of four games in the point-and-click adventure series from Daedalic Entertainment. You know the score with point-and-click adventures – you speak to characters to find tidbits of information, solve puzzles and collect items from one place and use them elsewhere. In the Deponia games, items can be merged on the inventory screen, though the correct combinations rarely make logical sense, as early on you’ll be making a pie for a friend and putting in things like a urinal cake. Some friendship, eh? Gross.

That sort of toilet humour is abundant throughout this Deponia adventure. You’ll be holding a baby until it barfs over your friend, feeding all manner of toiletries to a cell-mate to attract the attention of prison guards, and sprinkle fish scales all over a soothsayer’s robe so he thinks he has dandruff. It’s a level of humour which hits the spot more often than not, with the art style lending itself well to the comedy side of the game. It’s almost a The Simpsons-esque presentation, and everyone loves The Simpsons. Yep, even the new ones.

But, where Goodbye Deponia excels the most is in its puzzle design – and not necessarily the puzzles involving moving items to and fro. The particular highlight in this edition is a puzzle involving a seemingly never-ending maze. With protagonist Rufus and partner Goal having been locked up, a very clever placement of a coffee cup is enough to get the job done, but it’s the sort of puzzle where the answer is staring you right in the face for the entire time that you’re trying to figure it out. For this reviewer, that’s the most satisfying kind of puzzle of them all; one which evokes a eureka moment after a while of fruitless trial-and-error. There are a couple of dud puzzles, however – some don’t seem to have any logical sense at all, but fortunately, you can take the cheater’s way out and skip these puzzle set-pieces.

Half-way through the game, Rufus finds himself being cloned and split into three different versions of himself, and at that point, the game becomes a little more layered – you can switch between each of the three Rufuses at will, but each is in three separate locations with three separate stories to play through until they eventually reach points where they are able to come in contact with each other and interact by means of passing items to one another. It’s all very cleverly written, and though in storyline these things are all going on at the same time, there’s never the added pressure of feeling like you’re rushed. Players are able to just explore Deponia’s world at their leisure, and that’s very welcome.

A few dud puzzles aside though, there’s one other drawback in Goodbye Deponia, and that’s the physical movement. Getting too close to open doors can have Rufus walk through them and leave the scene when you intended to walk by them, and that happening repeatedly throughout the course of the game meant it became more and more noticeable and irritating.

Still, that can be overlooked – Goodbye Deponia is great fun, with some clever puzzles, humour and story. Just don’t spoil it for yourself by using a guide.

Goodbye Deponia is clever in parts, funny in places, and an enjoyable romp most of the way through. Some dud puzzles and fudged movement controls aren’t enough to derail it too badly.