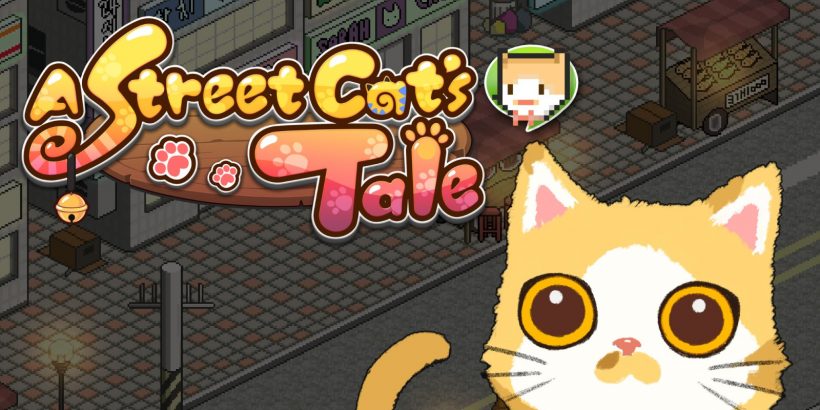 Wherever cat games go, the cat people follow, and so it was with me and A Street Cat’s Tale. In this title, you play as a kitten who has lost its mother, and you must survive until you become an adult cat.

After a short (and rather sad) opening sequence, you’re left to your own devices in the middle of a small town. It’s tough out there, and you’re quickly tasked with survival, which involves collecting food and resources while avoiding the world’s dangers. But although you will face many challenges, there are various animal and human NPCs to befriend along the way, and these friendly faces may just help you out with food or key information if you’re lucky.

Perhaps most important for making it through alive are your hunger and health meters. Your hunger meter depletes fairly rapidly over time, so you’re always on the hunt for food, however, you can get a small boost to your stats by upgrading your shelter, which is essential if you want to be able to roam far and wide with ease.

By all accounts, this formula is a basic one, but even so, the execution shows cracks. The gameplay relies heavily on the same mechanics from start to finish; in short, A Street Cat’s Tale is largely a series of fetch-and-carry quests. Those quests which go beyond this formula aren’t groundbreaking, though, as what’s required to achieve your goals is, on occasion, fairly unclear. And finally, while the first run is something of a challenge due to your relatively low stats, once you’ve upgraded your shelter to the maximum, the game’s challenge drops significantly, making it slightly too easy to offer a meaningful challenge any more.

A Street Cat’s Tale offers multiple endings, and while they are genuinely moving, the gameplay is almost identical each time you play. There’s little meaningful progression, either; almost everything is reset at the beginning of a new run, and the only progress you retain is your shelter upgrades. The game quickly becomes a cycle involving the same conversations, the same NPCs, the same locations, the same food, and so forth, with only minimal changes required for the most part to unlock alternative endings.

This isn’t to say that there’s no value in the gameplay, though; A Street Cat’s Tale is easy to pick up and play in short bursts, and unlocking the endings will tug at your heartstrings enough that upon finishing one run, you’ll want to jump straight back in just to see what the others have in store. Each NPC also has their own backstory and getting to know each one certainly brings some colour to the game.

The same cannot be said of the sound direction, however. There’s only a single tune, and while it’s pleasant enough, it starts to feel the same after you’ve heard it too many times. The game’s pixel art is endearing, though, and there’s always something nostalgic about isometric adventures like this one. Thankfully, the world is also large enough that there are a few different areas to explore as you play.

But even speaking as a die-hard cat lady, it’s hard not to feel like something’s missing here. A Street Cat’s Tale is a rather solid choice for short bursts on the train or bus, but it’s lacking the depth that would allow it to reach the pinnacle of purrfection.

A Street Cat’s Tale is a reasonable choice for the die-hard cat people out there, but the gameplay may be too straightforward to keep you engaged for hours on end. Playing in short bursts is key to enjoying this one.