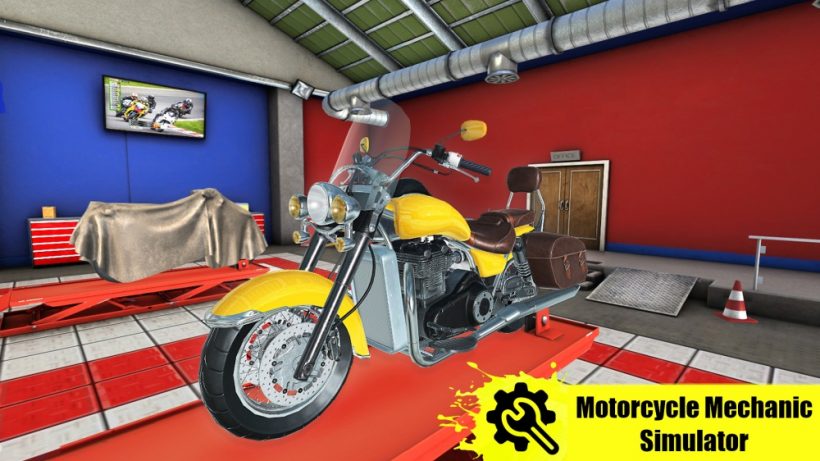 It’s always fun to imagine yourself in a different job when life is tough, which is perhaps why games like Euro Truck Simulator have seen such a resurgence recently. If your dream has always been to set up shop and get your hands greasy as a motorcycle mechanic, Motorcycle Mechanic Simulator might be the game-based first step to making your dream come true.

Coming fresh out of the PyramidGames garage, Motorcycle Mechanic Simulator allows you to own a workshop, service motorcycles for clients, and eventually spend your hard-earned cash buying private bikes. You’ll start by servicing cheaper bikes with just a few contacts in your book, but after a few jobs you’ll earn enough money and experience to pave the road to even more options. Gameplay-wise, you’ll be spending most of your time with your tools out, taking apart bikes and fixing them up for some quick cash. This is simple and can be fun, with a detailed 3D model of each bike showing the broken part in red waiting for you to set it aside and fix or replace it as needed.

Replacing parts simply entails choosing replacements from a catalogue, but fixing is slightly more involved as you get to polish pieces by alternating shoulder buttons, vulcanise wheels by spinning the analogue sticks, or spin wrenches to fasten loose bolts. These mini-games convey what you’re doing and showcase the many different bike parts, but the amount of repetition and lacklustre presentation means these tasks quickly become a drag. The disappointment doesn’t stop there, as all menu navigation, selection of bike parts, and manoeuvring around the game is met with a clumsy UI and painfully thoughtless flow between tasks. Every aspect feels like it could be sped up with more intuitive controls, and this put the brakes on any enjoyment I had.

This is a title that started life as a mobile game before being ported to Switch, which can be felt in every corner of the game’s poorly executed controls. Presentation sadly falls into a very similar wheelhouse, with menu icons being dull, backgrounds consistently feeling flat, pictures of potential clients being laughably bad stock pictures of real people, and all 3D background models and adorning textures looking lacklustre and bland.

To liven things up there is thankfully a driving mode. You’ll be chasing high scores for cash, earning money based on how far you can make it without getting hit, but here the execution again really slows down the fun. More dull textures and basic models make things visually unimpressive, while controlling the bike feels clunky and slow.  The driving mode was possibly the most fun I had with the game, but that is a backhanded compliment. It’s at least another way to level up and unlock more things, but finding new bikes and clients will only reveal more tedious mini-games all met with the same exhausting control problems.

With great motorcycle models while in the garage and plenty of custom parts to unlock, there is some good to be gleaned from Motorcycle Mechanic Simulator. Yet, while unlocking new features, bikes and customisation elements might be great for die-hard motorcycle fans, considering it’s held back by baffling control choices and poor graphics at nearly every corner, I’d still say maybe take another title for a spin instead.

While hardcore motor-heads might get a kick out of the motorcycles and customisation features of Motorcycle Mechanic Simulator, gameplay feels like it could have done with its own tune-up. Clunky controls, ugly visuals and repetitive gameplay slow this beast down to a melancholic crawl.